Home BIG-BRANDS 14 Smartphone Gadgets That Help You Take Out The Most Of Your... 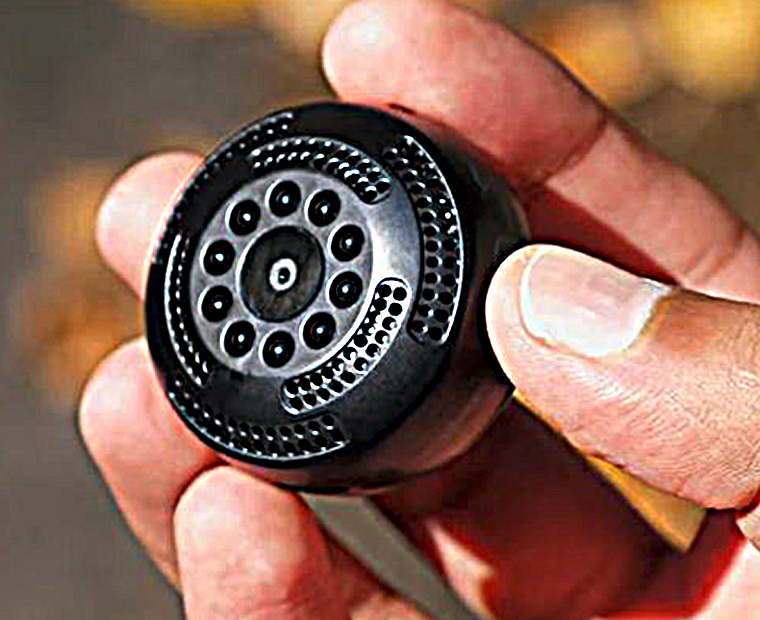 As the smartphone market grows, smartphone gadgets companies keep producing more useful tools and supplements that simplifies the use of your phone and probably make it better.

Basically, these companies focus on the user experience, so they’re working hand and hand with the smartphones manufacturers to help you profit the life span of your smartphone the most possible way. So these gadgets are really useful if you know where to get and how to use them. And here we have 14 smartphones gadgets that meant to invest on if you’re a smartphone owner. 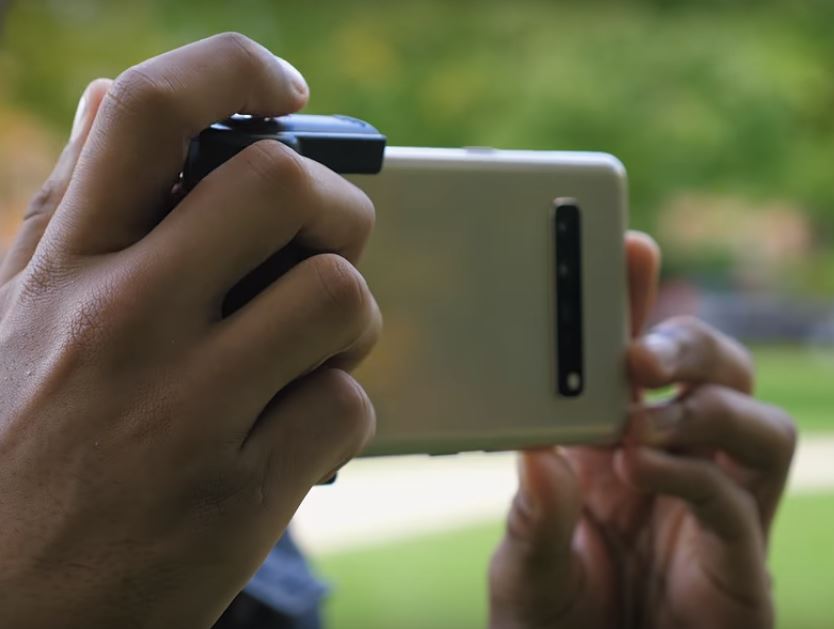 This is actually a little more than it looks at first glance. The premise is that it’ll turn your smartphone camera experience into a professional camera experience, so to do that it gives you a pretty meaty grip to hold on to, as well as a dedicated shutter button.

This thing lets you mount your phone onto a tripod, or twitch it comes bundled with. And what I think is even cooler, is that once you’ve done that even to slide the shutter button out and use it to take photos remotely. It also has the bizarre inclusion of a precision stylus within the handle, which in theory should help you edit photos easier. It is a little bit better than using a finger. Get it here at Amazon.com 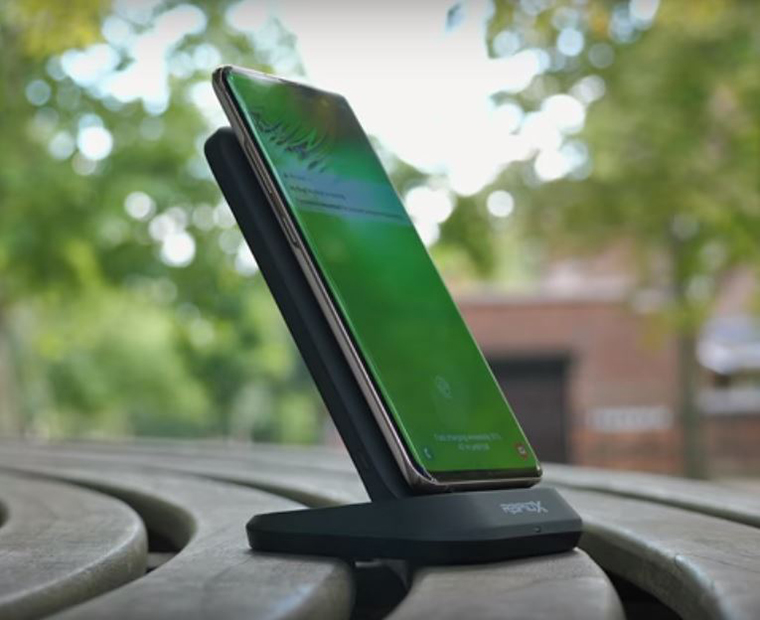 I honestly just love it when stuff fits together when different parts of a product complement each other, and that is exactly what you get here with the RapidX MyPort. It’s effectively a phone stand but whilst you’re hands on it, it uses fast 10W wireless charging to keep your battery topped up.

But here’s the kicker, This thing isn’t only a stand and a wireless charger, but the back component can actually act as its own independent 10,000mAh power bank. And as far as power banks go, it’s expensive but I like how neatly it ties together. It’ll charge itself whenever you’re using it as a stand, and even when you’re on the go with it, you’ll still benefit from the same wireless charging you had when it was docked. 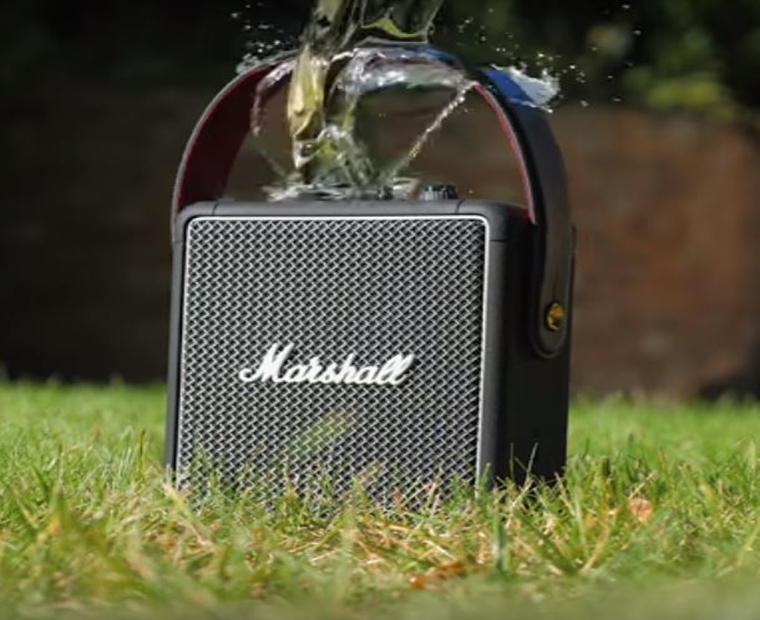 It’s basically a multi-directional powerhouse of a speaker, with a few cool tricks on top of that. So there are four things that I think are important in this gadget.
Number one, this is actually the most portable in their entire lineup designed to be thrown in a bag, and not worried about it’s made of tough stuff and is built with ipx4 water resistance.

Number two, it’s got Bluetooth 5 capability, which means massive range, but also that you can have multiple hosts or two users. Let’s say you and a friend, you could both connect at the same time and take turns playing music.

Number 3: has the fact that the battery can give you over 20 hours of play time, and the charging speed is fast enough that you’re actually getting 6 of those hours in 20 minutes; plus it can use that to reverse charge your phone.

Number 4: When it comes to audio, you’ve got one large subwoofer on the front, and then both front and rear-facing tweeters which high frequencies are a side-by-side versus a smaller speaker. Get it here at Amazon.com 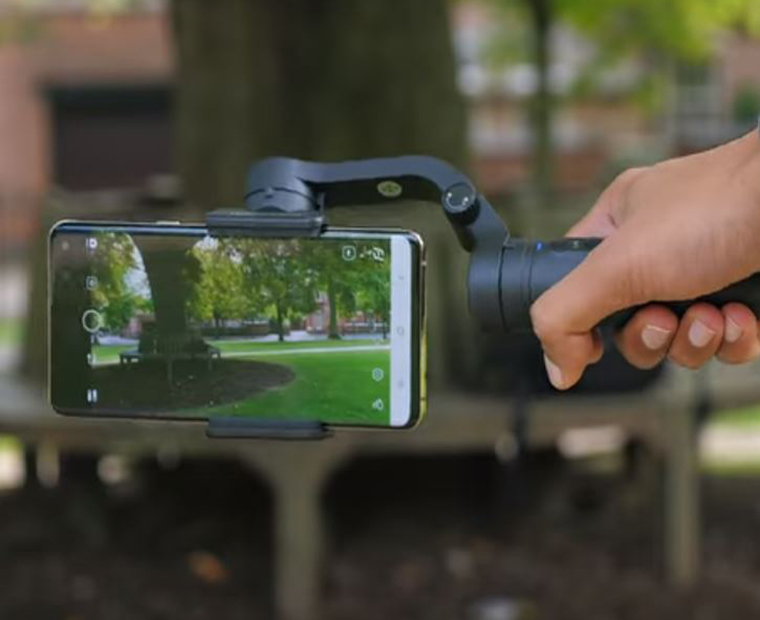 Now you’ve probably seen a lot of smartphone gimbles. but also probably not a lot that of this portable. This is the vlog pocket, and they weren’t kidding. It is literally small enough to fit into most jean or jacket pockets that I’ve tried up there with the smallest stabilizers that I’ve ever seen. It’s also better than I thought it was going to be.

The application connected instantly, and you don’t even need to use it. You’ll get the full stabilization benefits just using your normal camera app, but I’d recommend it. Because when using the camera App, you can tap a face and it’ll start tracking it.

And you can go for an automatic 360-degree panorama, but what I thought was even cooler, is that if you tap this ultra-wide mode, then even if your camera doesn’t have an ultra-wide lens, this thing automatically takes nine different shots and stitches them together to make what can actually look even better. At this price, and with these kinds of dimensions, it is really a good idea to test this thing out. Get it here at Amazon.com 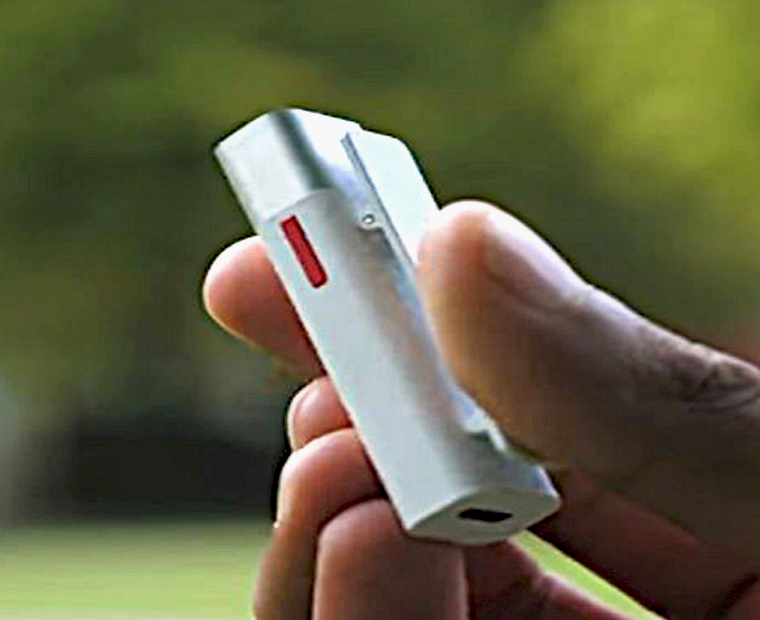 This tiny thing allows you to transmit real-time audio into your smartphone using Bluetooth, so without any cables, you clip this to your clothing, and just start recording using their application, and your audio will go something about 10 meters from the phone.

This thing is really useful when you’re recording a video where you want your entire body to be shown, but at the same time, you want your sound to be captured clearly. 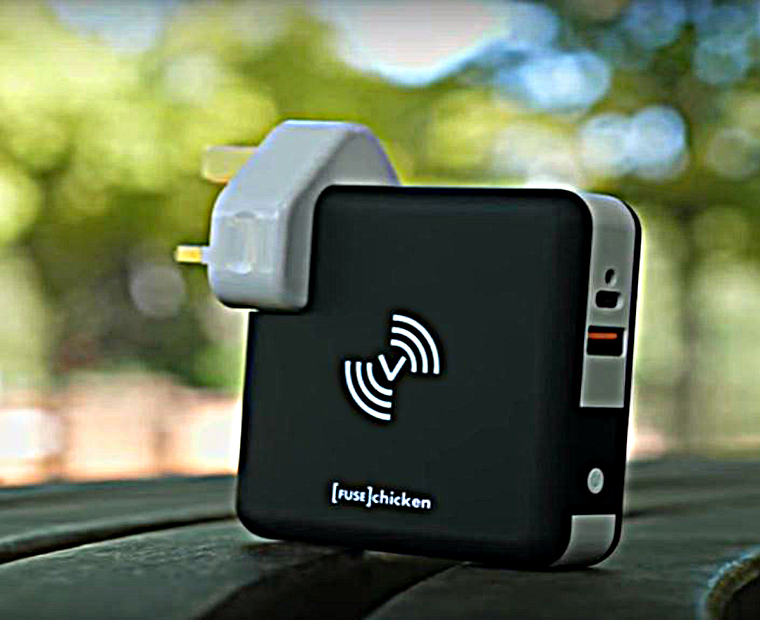 Now I’m not sure if the name of FUSEchicken inspires confidence when it comes to your charges, but all my doubts will cast aside when I opened this thing. aesthetically it’s shaped a lot like a MacBook charger, but whilst it doesn’t charge with as much power as that; because it doesn’t need to, it actually feels nicer and comes with a whole lot more features at its core.

You’re looking at a plug they can charge your iPhone or Android device with up to 18W. It comes with a whole load of worldwide adapters, so it can work almost anywhere. It’s got both a USB-A and a USB-C port, plus a little display to show you what the battery level is. This is also a power bank that you can use to charge your phone on the go, with wired and wirelessly. 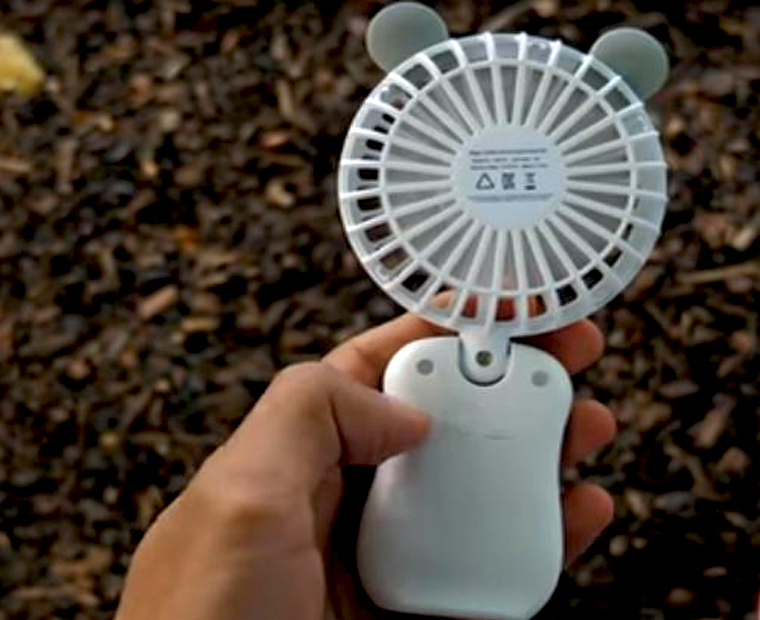 This is something that doesn’t need much of an explanation. It’s a fan with six sticky pads and so whilst it can be used on a lot of different surfaces. one of the most interesting applications is literally grabbing it and sticking it to the back of your phone there are two power settings, and on the top one, it really does pack a punch. It’s also got a built-in multicolored LED not really sure why, to be honest. 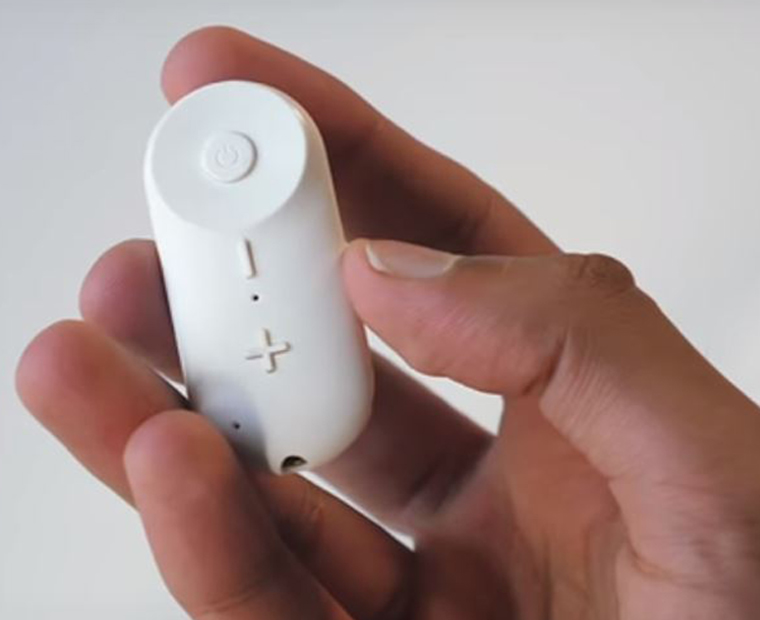 If you’re the kind of person who finds themselves using older wired tech even though every company is pushing for Wireless, this thing might make a lot of sense. It’s a Bluetooth receiver with a headphone jack, or in other words, it can convert your wired audio gear like earphones and speakers into Wireless.

It’s just a remote but it’s well designed. it’s made so that your fingers even if it’s in your pocket, you can easily feel for where each button is. 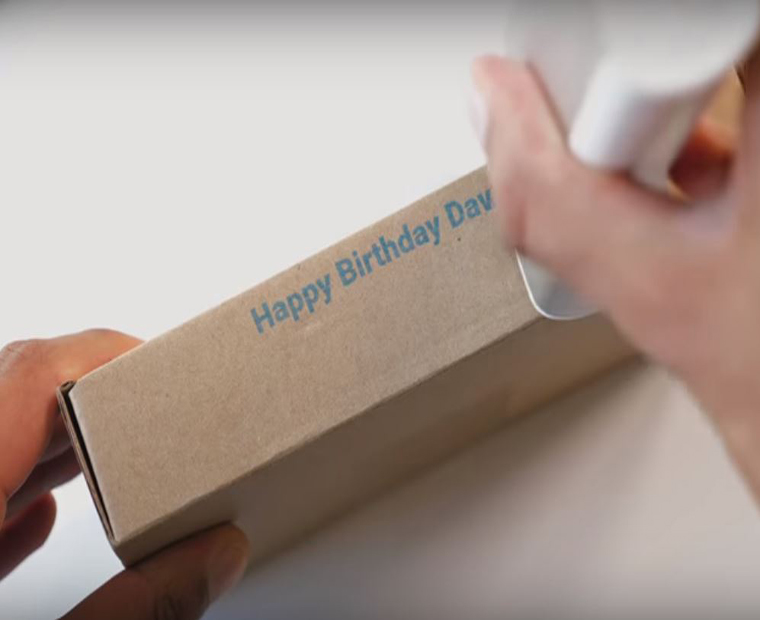 When you hear the word printer, you’ll probably be reminded of one of those products that take up half your desk and practically eats through your ink, but this is a little different.

The Evebot print pen is a portable printer which comes with a whole lot of perks, but also two primary compromises. You use the app to select what you want to print, it could be stickers text or even full-blown photos you’ve just taken, and then with one tap its that signal to the pen which you then just pressed against a surface and you’re done.

What’s impressive is that the surface itself is rarely a limitation, you can print on paper yes, but also wood textiles items of clothing anything that can hold ink. And it really comes into its own when you’re trying to make personalized gifts. But the two things to bear in mind are that you can only have a print in one color at a time. and that the entire way this works, it strongly favors horizontal content. 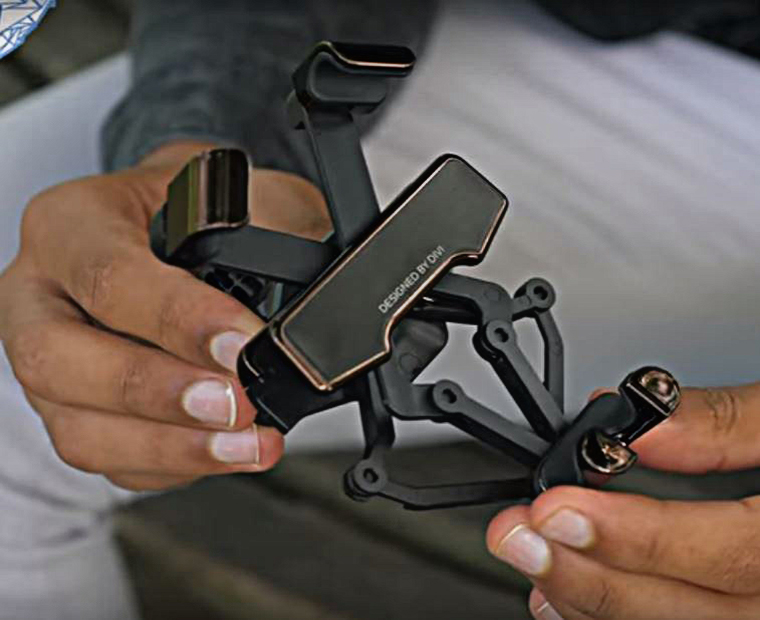 This is basically a clever little holder by company Divi. this thing clips into anything that this will fit around. it uses a pretty elaborate mechanism to make that fit secure, and also has a rotating ball to allow for a good amount of movement. 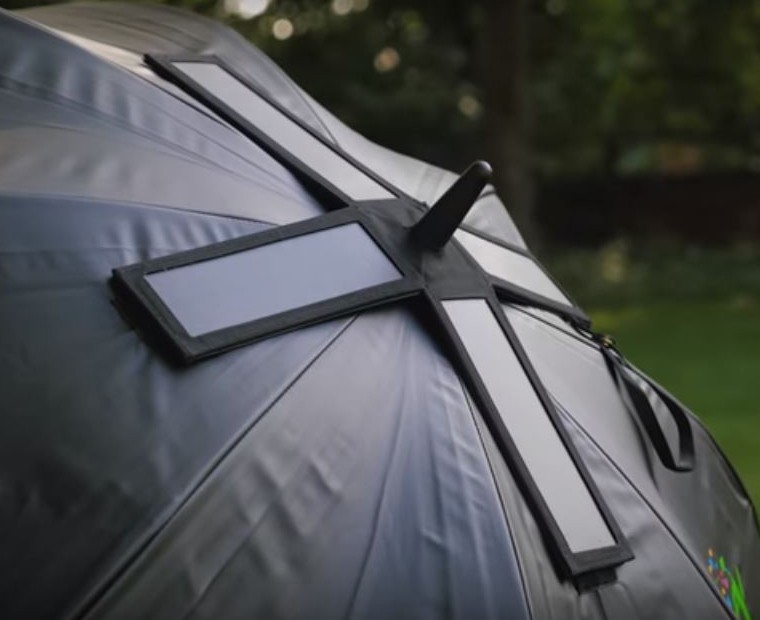 This is possibly the world’s most advanced umbrella, created to actually make use of all the empty space on traditional umbrellas. So, there is a battery inside it, and I believe it’s in a handle and you also get a USB port that comes from the bottom, which again lets you use this to charge your phone.

It also comes with some small solar panels, which are designed to clip to the top to keep it constantly powered up. and get this the umbrella has a physical fan inside presumably to keep you cool during a hot day. 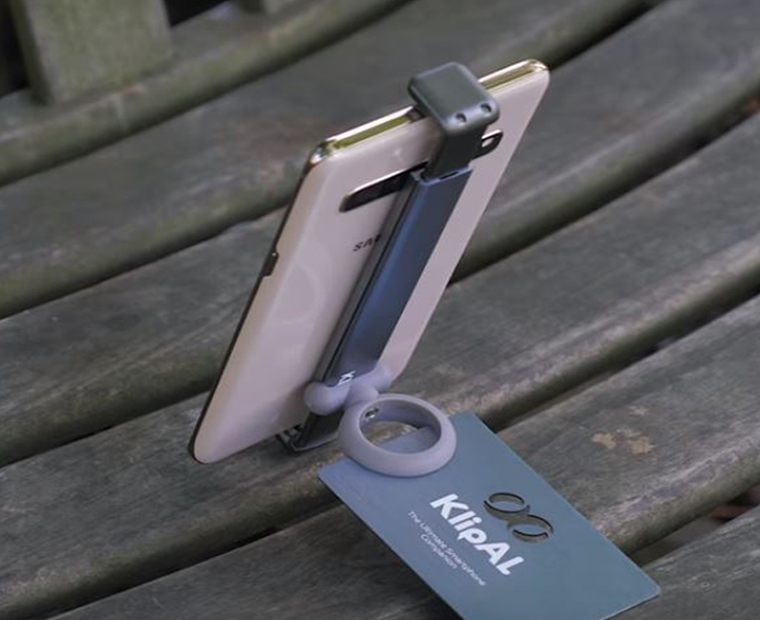 Now although, one of the most surprisingly versatile smartphone gadgets the best way I could describe it is the Swiss Army knife of holders. you’re getting what is effectively a rail, which you can use to attach over the entire height of pretty much any modern smartphone.

And then like something out of a Transformers movie, you attach these different parts in a frankly incredible amount of ways. It doesn’t necessarily look particularly secure, but most do it would need quite a pull to tear it apart. 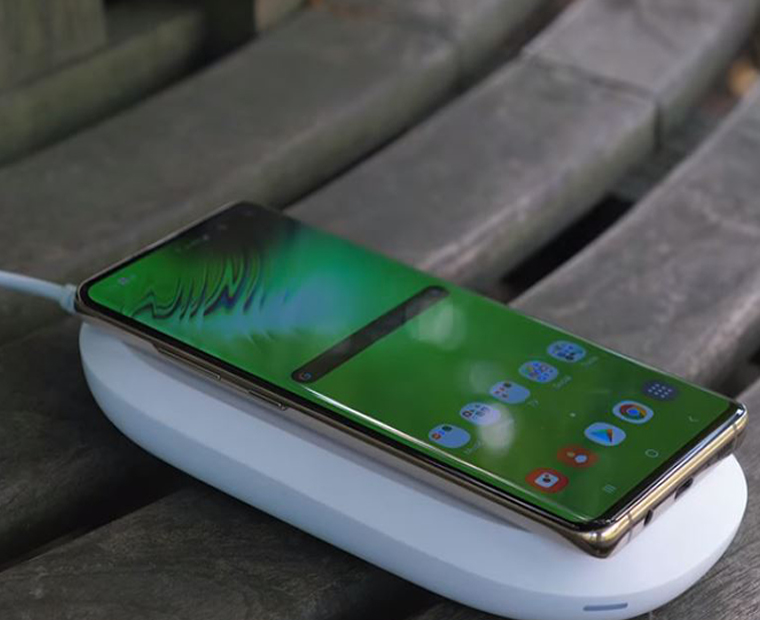 The Sun disc I expand is a clean-looking wireless charger, but with one significant perk this is a product for people who don’t really want to rely on online backups what it does is every time you place your smartphone onto it, it’s not charging with 10W of power only, but at the same time it’s backing the contents of your phone up to be stored locally on it.

Now as a bit of a bonus we’ve got this tiny camera it’s built primarily for security, and monitoring and it can record video in 1080p. The idea being that it’ll send alerts to your smartphone as soon as it detects any motion, but the whole reason for this crazy design is that what you’re actually saying here are ten separate infrared lights, which means it cannot just work during the day but also at night too.