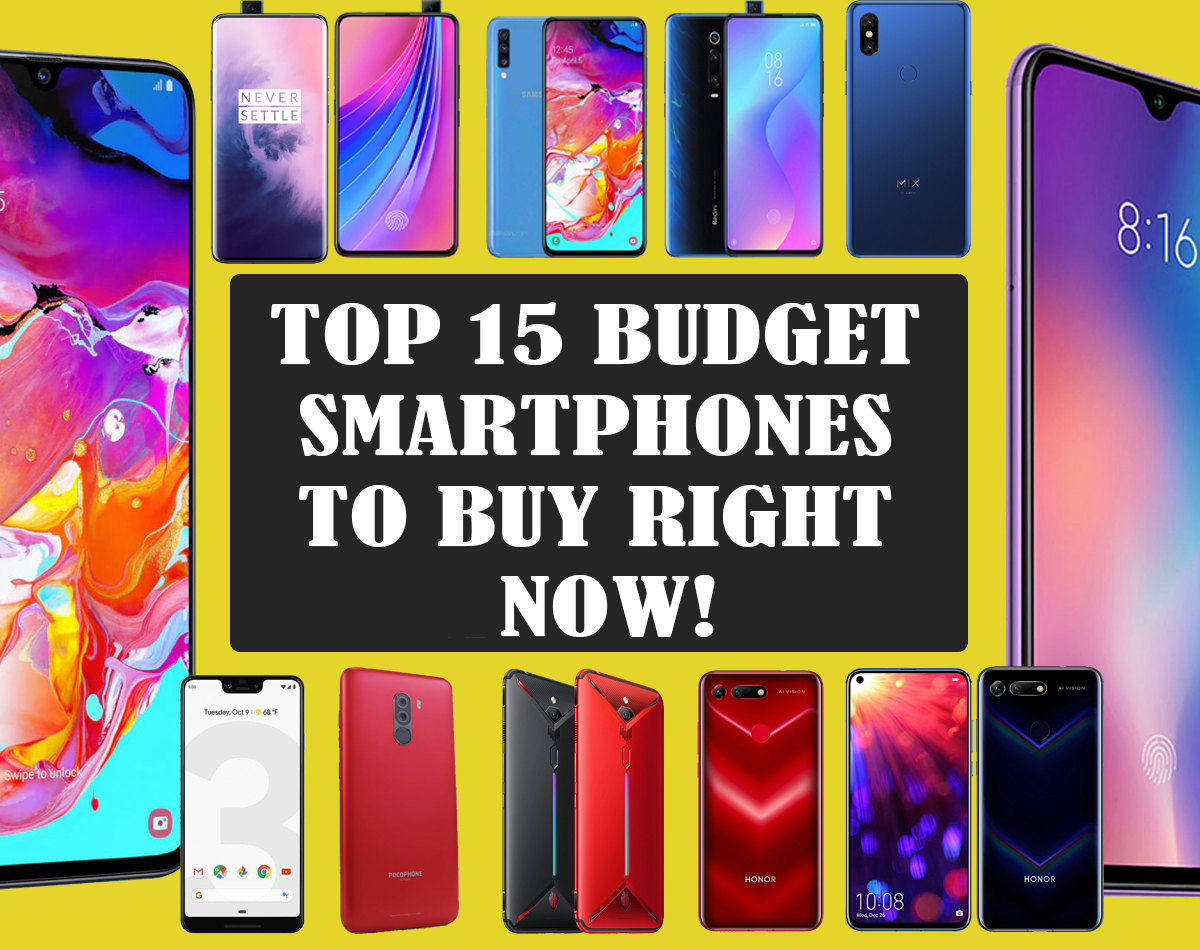 NUMBER 15: In this top 15 smartphones list, we placed the Vivo V15 Pro at number 15; because, it’s only cost you $399 to get a none disturb contemporary design, a super AMOLED display that fills the main caveat, being a mid-range snapdragon 675 chip, but at the same time it’s kind of amazing that were at a stage where the main complaint with this mid-range phone is that it comes with a mid-range chip that’s just how competitive this market is right now, and that is great for the consumer.

NUMBER 14:  we’ve got Xiaomi Mi mix 3 and this is one of the slickest phones, thanks to the Super AMOLED display on the front with its dual front cameras being activated with what might be the most addictive sliding mechanism on a phone to date. And don’t be fooled by the fact that this is last year’s phone, because the snapdragon 845 chip inside of it is every bit as powerful as the mid-range chips released this year.

NUMBER 13: is the LG g7 think you and this is going to seem like a really weird choice but LG smartphones have maybe the worst value retention but that also has a flipside whilst it made almost no sense to buy this phone at launch I’ve seen this thing brand new online now for two hundred and eighty dollars two hundred and eighty for some of the best hardware of 2018 a good camera a powerful speaker and a quad HD plus display the battery is on the small side though at 3000 milliamp hours

NUMBER 12: The Honor view 20 really set the bar high for 2019. It released right at the end of last year with a flagship grade Kirin 980 chip, a pretty high-end 48MP camera, and was one of the only phones in the world with a punch hole display. Now that a hole punch phones have come out with similar features. It doesn’t quite stand as the mid-tier king, but is still a very well rounded phone.

Alright now we’re on the subject of Honor and Huawei; though, you’ve probably heard about the fact that they’ve been blacklisted from working with US companies, which includes Google, so their future viability is uncertain. for this my advice would be that if after reading this article you decide that an Honor or Huawei is the way that you want to go, then just hold off for a few weeks just don’t buy anything for now and I reckon within months time we’ll have some sort of clarity or some sort of public statement from the company.

NUMBER 11: The Samsun A70 which comes with a massive 4,500 milliamp hour battery combined with the fastest charging Samsung offers at 25 watts. It even has a 6.7 inches Super AMOLED display on the front the main compromise here being a mint here at Snapdragon 675 chip, but for a lot of users that’s great.

NUMBER 10: The PocoPhone f1 is pretty good at everything, performance, camera, and battery. Even a year after of its release, is still comparable. And so the fact that it’s now even cheaper than it was before is a bonus.

NUMBER 9: The Honor 20 is amazing value for money. And is actually one of the only situations where I recommend the standard version of a phone, as opposed to its pro counterpart. The standard Honor 20 is still powered by a flagship grade chip, and is one of the only phones with this kind of power that is compact enough to be used in one hand. It has a side mounted fingerprint scanner which is really tough to part with once you’ve got used to it, and a quad camera setup. Although, one of these is just for depth sensing.

NUMBER 8: The pixel 3a XL. And I’m going to preface this by saying, this is not a phone for a tech ed this is not a phone for a gamer, or even a phone for the person who wants the most beautiful design. but what it is one of the cleanest and one of the easiest Android experiences the software is blissfully like to use and the camera captures amazing photos effortlessly oh yeah and battery life on this is off the charts a lot more than its 3,700mAh battery capacity would suggest mind you that is already a pretty large cell but it’s more the fact that the phone’s hardware puts very little screen on the battery.

NUMBER 7: When the Huawei mate 20 Pro came out late last year, I completely fell in love with that phone. And whilst that doesn’t fit into this price bracket, what does is the standard Huawei Mate 20 and this one makes sense for a lot of the same reasons.

As the honor 20 you’ve got that flagship Kirin chip inside, a proper triple camera with an ultra-wide lens, and a telephoto camera and the kind of design and materials that are usually reserved for flagship phones.

NUMBER 6: But what I think makes more sense if you’re going to go down that route of buying an old flagship phone instead of a cheaper newer one, is the Galaxy s9 plus which software wise is very similar to what the Samsung A70 offers. But you can’t shake that feeling of this being a flagship as opposed to a mid-range phone you get a flagship grade metal and glass body flagship, great display, flagship grade, and Dolby Atmos speakers.

And so when you combine that together, that’s quite a tough combination for a newer mid-range phone to beat. So if you want a mid-range phone that has, premium build material, great specs, that’s the address you should follow.

NUMBER 5: In fifth place the RED MAGIC 3: completely blew me away if you’re happy with having a phone that weighs over 200 grams and one with above-average sized bezels, it doesn’t get much better than this. Having the most powerful components is only the start with this thing, it has a massive 6.6 5-inch, 90 Hertz AMOLED panel, an incredible 5000mAh battery which can pull through two days of medium use, and a ton of features to appeal to the gamers.

You’ve got, a customizable LED strip, a proper shoulder buttons, and probably the coolest thing is that this phone has an actual dedicated fan to keep temperatures down. It also has more or less the same a 48 megapixel camera as most of its rivals, but it is let down a bit by a mediocre camera software and image processing.

NUMBER 4: OnePlus 7: Don’t be fooled by the fact that this phone has only one main camera and a second for depth, it takes both amazing photos and amazing videos, especially, after a new update that’s just dropped. But that’s not even the best thing about the phone, the software it’s running on oxygen OS is incredibly fluid. It is light, fast, and this time around the companies also added stereo speakers.

NUMBER 3: Xiaomi Mi 9 and people have been telling me that they found it cheaper, but the best price I could find for this was $470. And compared to the OnePlus 7, you do miss out on oxygen OS which I personally prefer to Xiaomi UI skin. but it is cheaper while being just as powerful, and also comes with a more versatile triple camera setup at the same time though whilst it really is a great phone it doesn’t make much sense to buy the Mi 9 right now because we’re phone all come to very shortly any

NUMBER 2: The ASUS Zenfone 6, this phone is not what it initially seems. On the first impression you see that rotating camera setup, and you think, Okay! This is great! yet another one of those phones that’s really interesting to look at, but that I wouldn’t actually spend my money on, but Asus has got a device that walks all over that notion. The battery life is exceptional with a mega 5000mAh cell, the UI is snappy and bloatware free and the camera is not just something to ogle at, but it takes amazing photos and videos on. Not just the rear but the front as well.

NUMBER 1: And then in first place and you might have seen this coming is the Redmi K20 Pro, or the Xiaomi Mi 9. They’re both basically rebranded versions of the same phone, and in almost every way this is Xiaomi Mi 9, but better it is cheaper, a much larger battery and a display that fills the whole front of the phone. No notches thanks to this motorized pop-up camera, which also looks pretty slick thanks to the built-in LEDs. >>

So, that is the $500 mark covered. But if you did want to spend more than that, if your budget can stretch, there are 4 small phones I would recommend right now.

You’ve got the OnePlus 7 pro, which is a no compromise phone at under $700. And there’s the iPhone 10’s max if the Apple ecosystem is something you enjoy, and you want to carry on investing in, then this is still the best Apple has to offer. Plus it’s just about to get a lot better with iOS 13.

The Huawei P30 Pro is the most impressive photo camera on a phone period. Whether your subject is a hundred meters away whether it, has no lighting, or whether it is right up close next to your camera, the p30 pro can do it. And I would say the word versatile that doesn’t even quite cover it.

And then if money is no object, the s10 of 5g is the best phone out there right now in my opinion. It’s the phone I choose to carry around every single day. the s10 plus is a really good option too, if you want something a little bit smaller and don’t care at all for 5g. >>

And if you want to spend less there are another four phones that I can recommend: the Moto G7, which is a really well-rounded an especially well-built phone for the price. the Mi 9 SE which is a smaller trimmed-down Mi 9, but considering the price discount the fact that it still retains an ultra-wide, and a telephoto camera is a real plus.

Then there’s the Samsung galaxy A50, which feels very similar to the A70 to use, but a little smaller. There are some compromises like a slightly weaker processor and camera, but considering how close the experience feels for almost $100 less for many this is actually better value.

Another option is the Redmi note 7 Pro, maybe the cheapest smartphone to have a 48 megapixel IMX586 powered camera. That is the same sensor as on the OnePlus 7 pro, and it’s also just all-round a world specs phone.