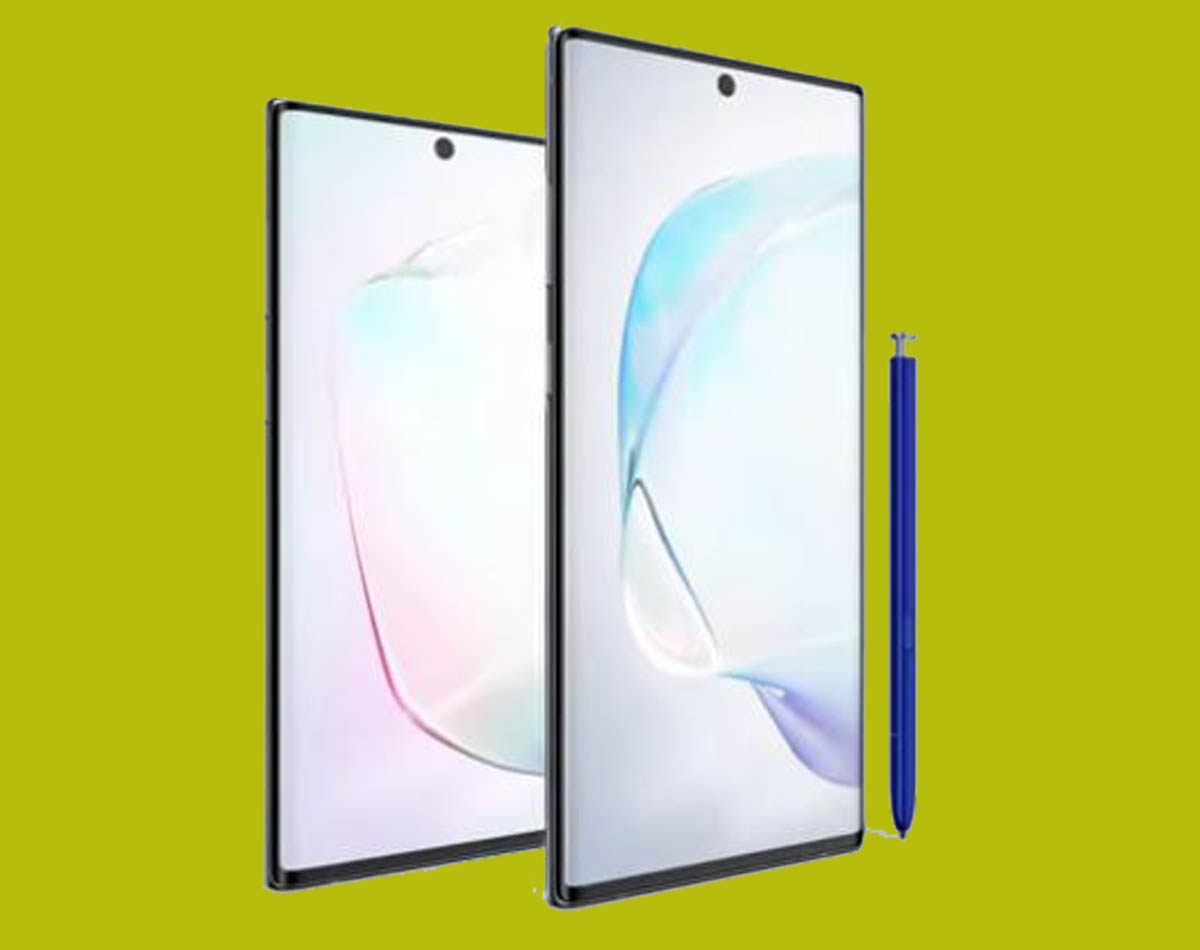 Finally, we got the brand new Samsung Galaxy Note 10 and Note 10 plus. After many months of leaks and rumors, we finally are able to put the note 10 vs note 10 plus under our tech knowledge telescope to give you the rundown of all of the new features of both. So it’s time to grab your notebook to see what I did there and delve straight into the juicy details.

So without further ado let’s get straight to it… Get the Galaxy Note 10 or  Note 10 plus here at Amazon.com

Starting with design, they basically look completely identical. The only main real difference is on the rear, where we have an extra camera lens and we’ll get onto the cameras in a second…

On the top we have, the SIM card tray which is dual SIM, the volume rocker up and down, and the power button on one side which also coexists as a Bixby button, and there is nothing on the other side.

On the bottom, there is a Type-C charging port and speaker which makes it stereo because of that front-facing speaker on the display, a microphone, and the usual S-pen as well.

On the screen, the Galaxy note 10 features 2280 by 1080 AMOLED display, while its bigger brother the Note 10 Plus has 6.8-inch quad HD+ dynamic AMOLED display. The 3040 by 1440 makes its resolution one of the most recognizable bump up comparatively to Note 10.

And as we were expecting, both of these phones feature the HDR10+ Gorilla Glass 6, always-on display, plus the Samsung Infinity-O display. Means that we still have the punch hole cut out at the top, but this time it’s in the center and not in the top right corner. And it’s slightly different from the one that we’ve seen on the S10 range. Get the Galaxy Note 10 or  Note 10 plus here at Amazon.com

There is also the Indus plate fingerprint scanner on both and that is the 3d Qualcomm variety, which means it is ultra-secure and again very similar to the s10 plus.

In terms of SoC, we are getting the snapdragon 855 again on both, or the Exynos 9825 depending on your specific region. The Exynos 9825 is an upgrade from the 9820 which we’ve seen on the s-line, now makes it a seven-nanometer chip. In early testing the 9825 has fared really well in single-core scores; however, it doesn’t fare quite as well in multi-core scores compared to the snapdragon counterpart on other devices.

And while we’re in the battery, let’s talk about something where the Note 10 really pushed the boundaries, and this is the charging time. With their fast charging technology, we are going to a 45W fast charge with the note 10 plus, whereas on the note 10 we only have a 25W fast charge. Based on those numbers, you’re roughly going to be looking at 70% charge in just over half an hour which is really impressive. It allows the charger to put the battery right up there where you want it just in few minutes.

Now in terms of storage, we’re looking at a maximum of 256 gigabytes on the note 10 normal, and 512 gigabytes on the plus model. There is no expandable storage on the standard and a micro SD card expansion on the plus model. The brand-new UFS 3.0 on both which offers read and write speeds that are significantly faster than eMMC (embedded MultiMediaCard) while retaining the same power consumption figures. And support Wi-Fi 6, max of 12 GB of RAM on the plus.

CAMERA: on the plus we have the triple that look identical, but it’s technically a quad camera setup on the plus; because, we have a time-of-flight lens as well which is good for depth and portrait shots. and Both have 12MP wide-range and dual aperture. Get the Galaxy Note 10 or  Note 10 plus here at Amazon.com

In terms of that main triple threat: it is the same on both, we have a 12 megapixel wide-angle, dual aperture sensor, 12 megapixel telephoto lens, and a 16 megapixel ultra-wide-angle lens, and the front camera is a 10MP lens.

when it some to video recording we have 4k at 60fps on the rear cams, and 4k at 30 on the front camera. So, again really impressive! Same as the s10 range we have that 4k ability in that front-facing camera and on top of that.

Once again something of producing some of the best super slow-mo shots in the game. The frame rates are something to be drawled out, not literally that would be disgusting but nevertheless very impressive and I can’t wait to test out in more detail.

You might be wondering, why I didn’t talk or even mention the headphone jack? The answer is here is simple, there is no headphone jack on either phones unfortunately. it has gone the way of the dodo, and it makes the marketing tactic of trolling other companies for dropping the headphone jack a little bit silly right now, but hey each to their own. And I just hope you’re ready with your double dongle.

There’s one famous feature about the note line that I haven’t talked about, and that is of course that magic s-pen. My personal favorite is the brand-new kind of air gestures. So, here is what to know: all the features that you already have on the note 9, are still available. Camera shutter button, play or pause, writing and sketching, the air command menu are all unchanged. And in addition to these things, you have some extra features. Like the air action, convert your hand writing to formatted text.

Let me know in the comment section below what you think about the note 10 and note 10 Plus which is your favorite, or do you like both of them in their own individual way, or do you like neither. Get the Galaxy Note 10 or  Note 10 plus here at Amazon.com