Home APPLE Apple Credit Card Everything To Know About 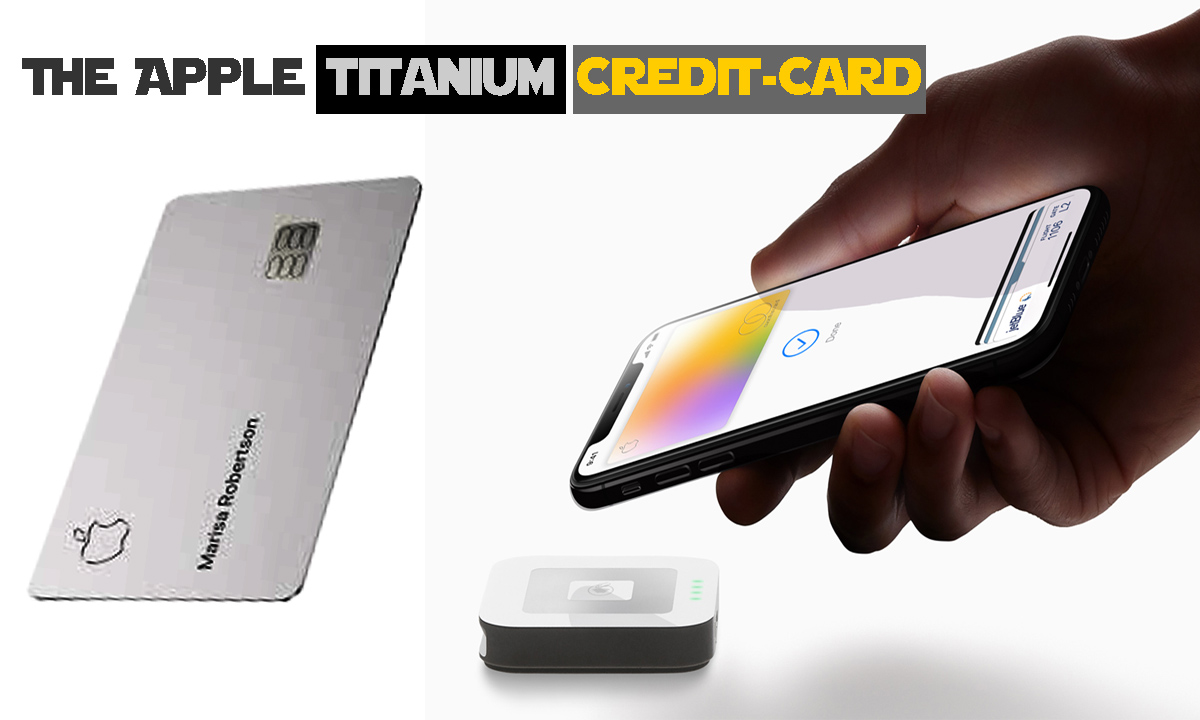 Here is everything you need to know about the Apple Credit Card: Apple is truly serious about services, what I mean about services is not music, not video, not gaming, and not even health. Though, I think that all of these things are very important, but now we’re talking about something different.

Its financial services, It’s a something that’ll be huge in one day. There are very few better ways to make money than money, and apples hoping the same great health coaching approach it took with fitness on the Apple watch, could help you and yeah them with budgeting in the wallet.

Apple’s positioning apple card is a credit card by a company that doesn’t just want to get you hooked to the interest needle and drain you. Not just dry, but to the very edge of dryness for a long draining life. To that end, it’s partnering not with any long-established long horrible Bank, but with a new bank that infinitely has a pretty horrible history all its own. Get the  New iPhone At AMAZON.COM

but it’s kind of like singular was when the iPhone first launched just desperate enough to let Apple do pretty much whatever Apple wants to do. And now slowly we understand, why Apple doesn’t have that kind of flexibility in its iOS mobile.

A big project like this one, needs too many years of studies and thinking to be able to take place in real life. You can’t just go and ask people to put their money in something like that, unless you know what’s going on and how to fix any issue before taking effect to the majority of your costumers.

But there’s certain things you need to know about before starting with Apple card:

You can use this card everywhere, you can use Apple pay including internationally. And if this sounds like an inflection point, I think that’s because it is a lot of these new Apple services leverage established apple services. Oprah’s Book Club is going to host authors at Apple retail stores, and then broadcast them through the Apple TV app. that’s very only Apple and so is apple card you can get real-time help any time through iMessage business chat, which is just phenomenally good experience.

WeChat is like the iconic example of services integration, but Apple card is literally bridging worlds and in a way that I think will make a lot of sense to a lot of people who haven’t quite yet crossed that digital divide.

One more bit of good news: first Apple isn’t charging any fees, no annual late international or over-the-limit fees. And that’s good that’s great, but it’s still a credit card and that means the interest is still real and the business model is still just awful.

Apple is doing some good stuff to mitigate it they’re keeping the interest rates low, they’re suggesting ways to pay that off faster including bi-weekly and weekly payments. They’re showing you how much interest you’ll be paying, if you choose different payment options.

They’re even offering payment plan options to help you get debt-free faster. But the entire credit card system is still absolutely an unabashedly evil. if Apple has to get in bed with it, I’d much rather see something like American Express the classic version where you can’t carry a balance and so there are no usury ‘us interest rates and no debt built businesses which frankly should be illegal anyway.

Apple is also using all the coaching skills they’ve developed for fitness on Apple watch and with health app, and are applying them to the financial services world. 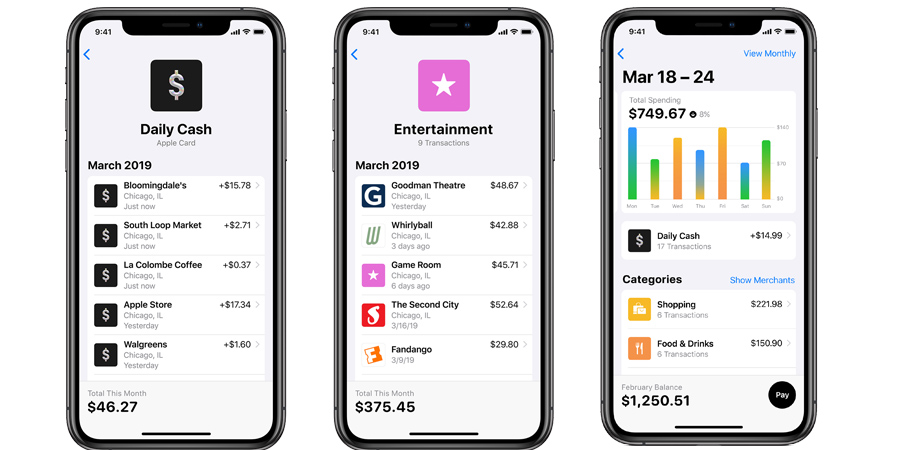 They have a kind of reward system cash back or what Apple is calling daily cash: you get 3% back on Direct Apple transactions, which is like online and retail. And 2% back on other online transactions made with Apple pay system and 1% back IRL, in which Apple is making an actual physical card, but not just any physical card and certainly not plastic.

But instead Apple is making the apple card out of titanium laser etched titanium with your name on it, and that’s it no number, no CCV no expiry date, nothing to leak your data to any shoulder surfers or cashier delinquents, just a gorgeous piece of metal that looks so cool. Get the  New iPhone At AMAZON.COM

All of that is put on your Apple cash card and you can see all the details all the time, and use it just like you would cash through the Apple pay system.

I bet it generates 90% of signups; though, it becomes available this summer hot damn! What’s more apples privacy first policy is extending all the way through Apple card as well that includes not sharing your information with Goldman Sachs. It’ll even generate a unique number stored in the secure element on Apple’s chipsets, plus online you have to face ID or touch ID to use it like any Apple pay transaction. 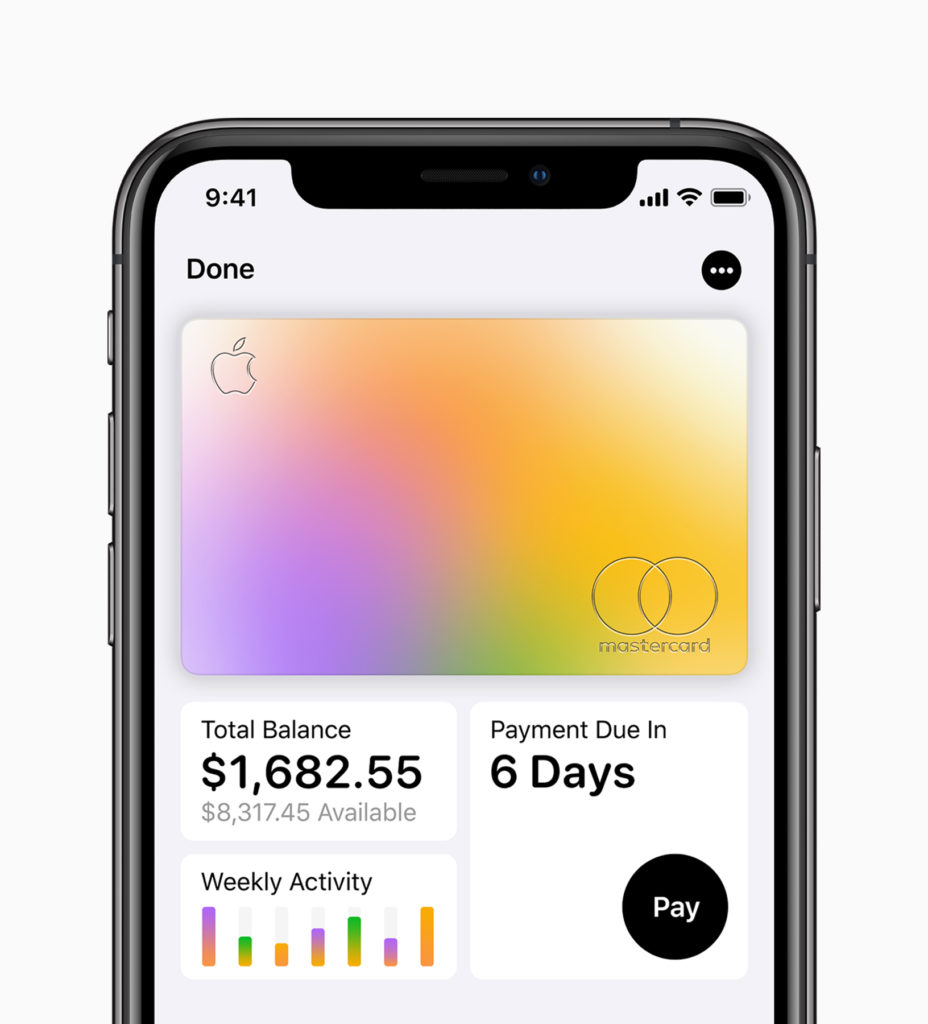 Get the  New iPhone At AMAZON.COM

There is an important question, why did Apple give you a card, TV+, Arcade and News+? Lots of services were directed to the US market in that event. We could say that phone manufacturers and market is slow.

Apple tried to invent -and it will work in USA- new market of services. This will ensure that profit will keep flowing for Apple. No one can deny the temptation in using their services. This huge US market will get more services that will ensure lots of profit for Apple.

We now know why they have created these services. Let’s go back to Apple card, where Apple cooperated with one of the deep-rooted banks in the world. What’s the goal behind it? One of the goals is that this service will force you to use their products. You can’t apply for Apple Card unless you have an iPhone. You will have to be in Apple ecosystem. If you have $1000, you will spend $1000, but with Apple Card, you’ll have to have an iPhone, internet, and then $1000.

For the long term, this investment won’t be much, but for the short term, it will be a huge investment. It is the same thing with all digital wallets. Apple’s move is really clever. This invention will lock people up in their ecosystem. They know that their devices have reached great maturity. And no one needs a better phone that the 3 previous iPhones, even for the upcoming 3 years.

Why would I make a new iPhone if I can make more profit from this method? In the last 3 years, Apple has been slow in implementing new technologies. The reason is that they don’t make new devices for sales, rather, build them using research and development. They check if people need these new devices, and if they don’t want to buy, they will make something they need to buy.

They will also make new services for users. The most important secret for Apple is that anyone with an Apple Card will spend more money. Many researches prove that if you have a digital wallet with money in it, you will spend more money. As paying is easier and faster. The money you have isn’t tangible, so the only thing you do is to tap and pay.

There is a profit for them in this process. The same why the Apple pay does by cooperating with other banks in different countries in different perspective than usual. Anyway, there is privacy in your financial transactions. Apple used this to promote their service. And no one will know what did you buy or from where. The bank will only know that you spend a lot of money and will be able to give you loans and deals on products you’re interested in.

They won’t know what you’ll buy though, but they know that you spend lots of money. Goldman Sachs could receive data of tens of millions of people in USA. It will also know that there are transactions happening. They will know if you pay your payments regularly, meaning you have financial fluidity, resulting in more loans and debts. And all of that will result in more profit for banks. Everything is protected. And you can activate or deactivate the card easily. Get the  New iPhone At AMAZON.COM