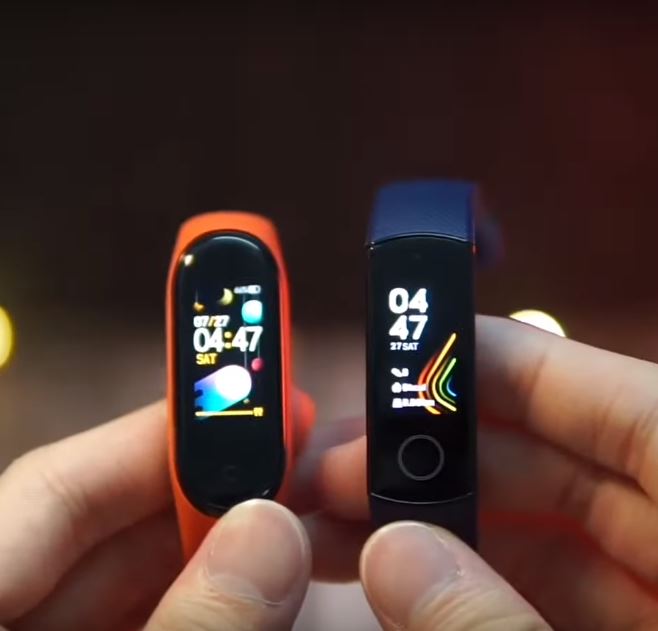 In this review, we’ll do a quick comparison between the Mi band 4, and the recently announced Honor band 5, which are the hottest budget fitness trackers today. Both these smart bands are under $30 dollars in Original country, but outside China, it depends on where you are. This quick comparison between both of these smartwatches will allow you to the performance of each one, the design, battery capacity and more…, to see which one is actually the perfect choice for you. So, without further due, let’s get into it…

Design: when putting these devices side-by-side to each other, you can easily spot the difference. Right away we’re able to see that both these smart bands sparked very different design languages. Mi band 4 has a rudder roundish design that curves around the entire display. And if you look closely, you’ll notice that the front display is flat but curves out towards the edges to give you that smooth swiping experience.

The capacitive home button on the Mi band 4 is represented by a tiny round circle, which I think looks really minimalistic and clean. Meanwhile, Honor band 5, on the other hand, has a completely different design language. You notice right away that the Honor band 5 is edgier, and uses a more angular design compared to the roundish design on the Mi Band 4.

The front display panel is also slightly curved, instead of being flat like on a Mi band 4. But because the display panels on both these bands are just so small, it really doesn’t affect the daily use. The capacitive home button on the Honor band is also the completely opposite of the Mi band 4 in such that it is represented by a super huge circle, so I personally think this is the ugliest part of the honor band 5.

But if you asked me, it is kind of a function over form factor here because the bigger circle is easier to spot unless you press it with more confidence.

FOR THE DISPLAYS AND MORE DETAILS CLICK ON THE NEXT BUTTON BELOW!