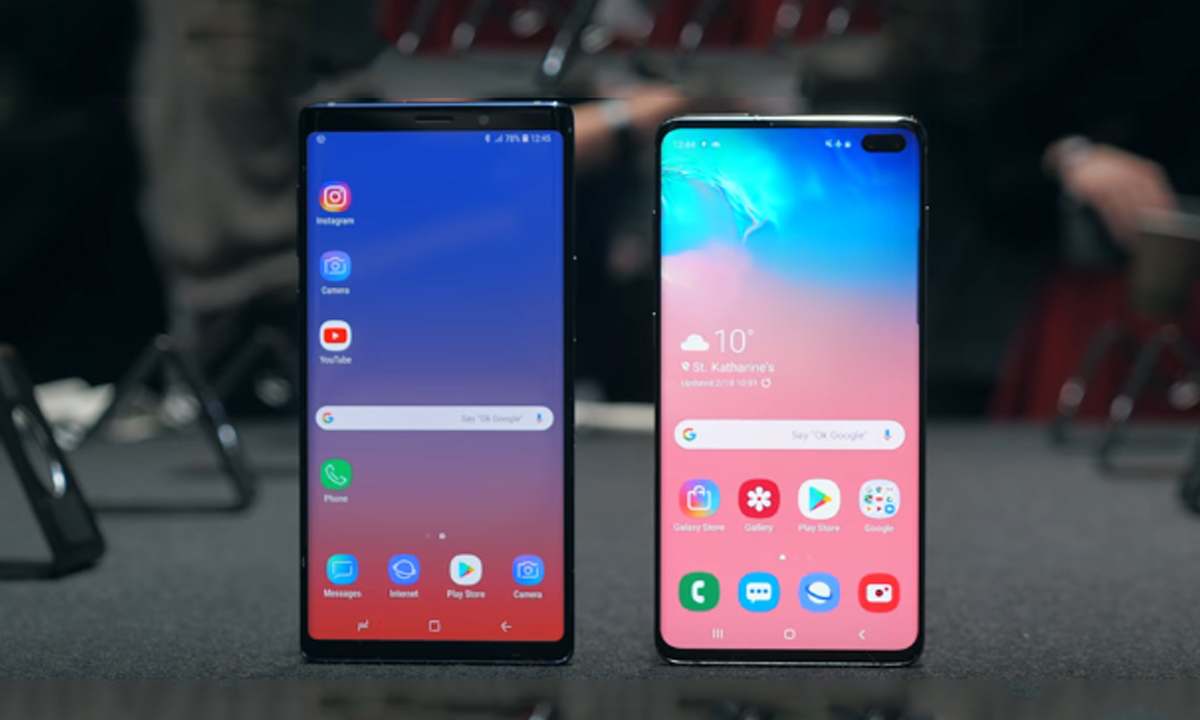 The question: Note 9 or S10 plus has been an interesting question. The short answer is, it depend if you want to go for the massive productivity sized smartphone that ended last year with a bang, or do prefer going to the latest and greatest most up to date flagship that just came out.

So, S10 Plus vs Galaxy Note 9, this two Samsung’s flagships are actually very attractive propositions in the market right now, and there are reasons for that. They both are the latest of what Samsung smartphone technology pushed to the market. They have a lot of in common, the same build material, the exact same charging speed, and ip68 water and dust resistance.

Differently to where the market goes about the earphone jack, these two smartphones still have the same ordinary headphone jack that starts to lose its place in the smart devices market.

Samsung with its new approach that puts a big emphasis on sound quality and speaker, incorporating with AKG that is an expert in this field, has made these two devices the best sounding phones in the market right now.

The Note 9 is much more Productive than any smartphone in the market right now, and one of its main advantages over the smaller S9 has been its at 6.4 inch display.

But now that Samsung have managed to cut down on the bezels pretty significantly, they’ve managed to get the same 6.4 inch quad HD plus screen into a much sleeker lighter body. and the screen is actually better on the s10 plus, because, it reaches a much more peak brightness of 1200 nits, making it pretty oblivious to harsh lighting and allowing content to be shown in glorious HDR10+.

And compared to HDR10 on the note 9, it’s slightly taller too, with a 19:9 aspect ratio, versus 18.5:9 on the Note 9. It just means you can fit a little bit more content in, when you’re scrolling on feeds. Samsung claiming that the screen to body ration on the S10 Plus is 93.1%, which is a bit wider than Note 9 that sets at 83.4. That whole punch on the top right corner, maybe the first thing that most Galaxy s10 Plus user, will complaint about. But honestly, it’s not as worst as that notch that we had saw, on the previous versions.


But it gets even better on something that does matter a lot of users now, which is long endurance. Really large batteries, but again, the s10 plus comes with a 4100 milliamp battery power. Comparing it to 4000 on the Note 9, it’s a huge enhancement in short period of time especially when we’re talking about energy saving.

And the best part of this, is that when you pick it up, it doesn’t feel like a phone with a battery that large. Combining that with a more power efficient seven anomie to chip in the new phone.

And is going to easily bit the note 9, as Samsung’s battery phone. So, in that sense it’s starting to look like the introduction of the s10 plus, almost completely invalidates the need for the note 9. But there’s two factors where it can’t.

One of them being the s-pen: there are a lot of people who literally wouldn’t even notice it’s missing. But the note series does have its fan base, and some people are still fiercely loyal to the stylus, so, you’ll just have to decide how important it is for you.

The other thing, is price: as the s10 plus has been launched sellers knew that Samsung will drop the prices of its predecessors. So, most of them will follow the market and drop the prices too. I expect, that in the next week or so, you’ll be able to find Note 9 for around $750 brand new, which makes it about 20% cheaper than the base s10 plus.

Another, price it’s not a bad option, but ultimately for 90% of people who are considering both. The s10 plus just makes more sense, This is why I would say that compared to what we saw between the s8 and the s9, this is not an iterative upgrade.

This is a leap forward, compared to the barely half a year old. Note 9 it’s powered by a chip roughly 30% faster, and the base model comes with 8 gigs of ram instead of 6.

So, this phone will not just load things quicker, but it’ll game smoother, download faster, and multitask more. All while consuming less power.

There’s also a souped up s10 plus with a ceramic finish, 12 gigs of ram and up to one terabyte of storage for those of you who’ve got a spare house.

You want a mortgage you also lose the awkwardly placed fingerprint scanner on the note 9, which allows you to adjust grip to use it in place of a next-generation 3d Sonic sensor.

So, it’s not just easier to reach now, but also more secure and it even works if you’ve got wet hands. for a lot of people, Even more significant than this, is going to be the cameras as well as a wide and telephoto lens like you see on the note 9.

The s10 Plus comes with an ultra-wide camera, which is really good for capturing entire rooms in one go. but it’s not just that, the s10 is better in a lot of ways it can detect more different scenes, it can take long exposure shots at night, and it can take super steady video pretty much as good as it gets on phone.

The S10 Plus also has the added advantage of two front cameras, which gives you a better track for our emojis and a more forward-facing portrait mode. But keep in mind though because of this new look that Samsung has gone because they had to give up the Iris scanner something that the Galaxy note nine still has a bit of a thorny subject.

Samsung does not have the best reputation when it comes to giving devices updates, and there are many Note 9s out there, that are still stuck on Android 8.1, while at least the S10 plus ships with 9.0 out of the box, and it is likely to get the next Android 10 update earlier. but also to Bear in mind that even if you have a note 9, you can still download the new fancy Samsung one UI software skin, that I really liked by the way much cleaner and simple.

And the S10 Plus has the coveted inverted wireless load feature. Although, it is still quite slow as on the 20 Pro mate. So, S10 Plus vs Galaxy Note 9 in terms of specs, both phones are very similar except for some few enhancements on the S10 plus. Especially, in the battery and charging technology without forgetting some retouches in the design.

And you Check the latest prices for both phones At Amazon.com: