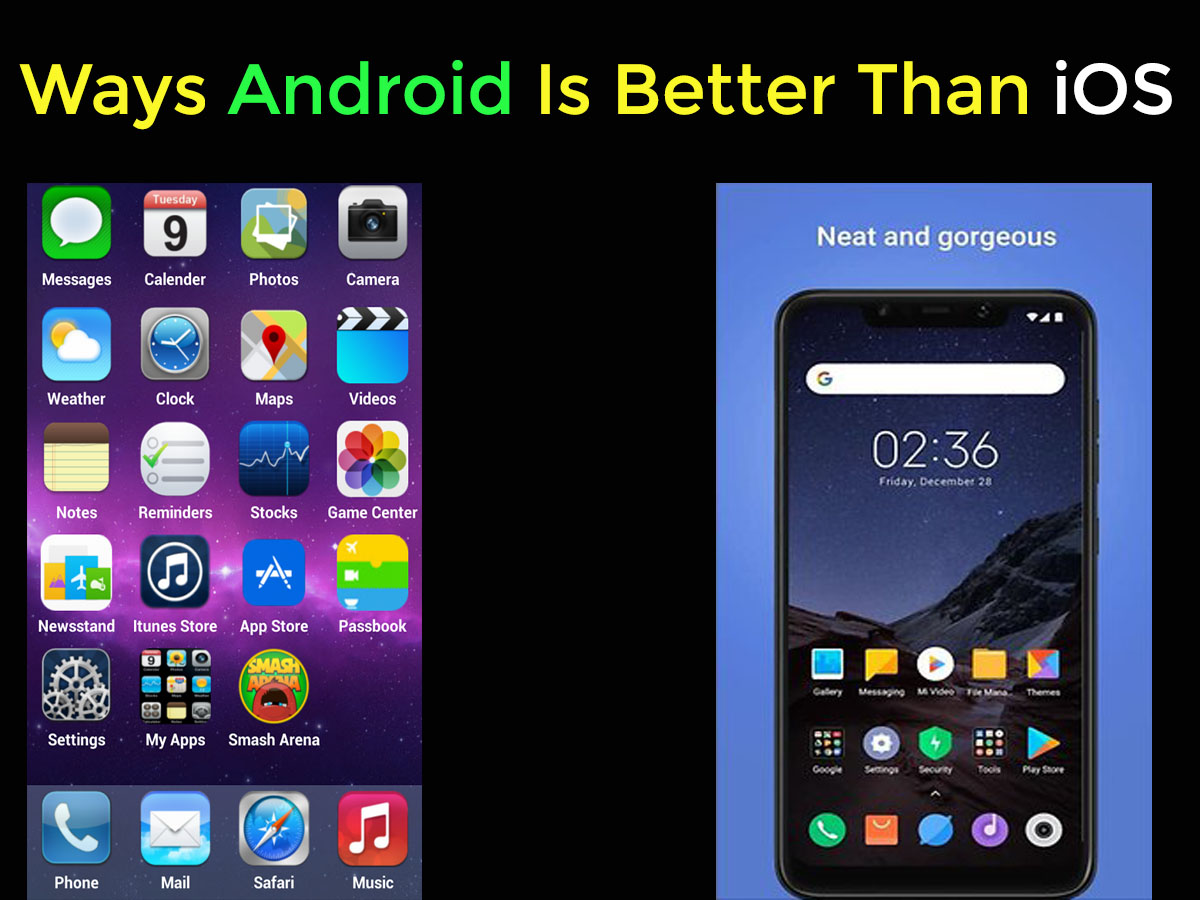 Android pie is a primary competitor as we all know it to Apple’s iOS 12 software, and in the time that I’ve used iOS on the iPhone 10S, I’ve come to find at the theory couple of ways android is better than iOS.

I’m basing my results of the Google pixel 3XL, since it’s software is pretty much the basis for stock Android and comparing it to the iPhone 10s.

For example: you can disable incoming notifications from your school, email or just dismiss emails that have attachments or even ignore notification to let you know when you’ve log into your account using a different device. In other words I can still block every notification for an app, but if I just want to block certain notifications and not have it completely muted you can do so as well.

Google assistant does a way better job at handling simple commands, it can handle more voice interactions to feel more like a conversation output to Center a slight second faster than Siri and it has a more natural sounding tone.

On top of that, if you own a Google pick so no matter the generation there’s a feature called call screen, which gives you the option to have Google assistant answer any incoming call so you can quickly figure out what the caller wants and see if it’s urgent.

I personally use it to get rid of scammers; though, Google’s AI is far ahead of the game but that’s not to say that Siri isn’t useful either. Siri still does a great job at handling simple commands and can’t do certain things that Google assistant can’t. For example: with the addition of shortcuts, a new app introduced in iOS 12. It really astonished me that I can create my own voice commands to do a variety of tasks.

#3 Multitasking: Android Pie, is better multitasking if you want to use two apps at the same time no problem, you can use split screen. Some androids do a better job than others at implementing this native features such as Samsung’s version.

For example, they allow you to swap the windows quickly or allow you to have a floating window instead for those who are on android 8.0 or higher. You can also shrink a YouTube video or most video players into a floating window, so you can do other things on the device it’s a neat feature called picture in picture mode, something we’ve missed using within iOS.

I also love swiping the navbar on Android Pie, or double tapping the recent button with a three button navbar to quickly switch to my recently used app. however, I will admit iOS has a similar feature which I also love where you can quickly switch to your previously used apps by swiping the gesture navbar to the left or to the right. But that’s the only multitasking feature that I found with an iOS besides the recent page. Android in general just has so many different solutions especially if you get a Samsung.

#4 Luncher: I’m not the one to bug about features that are mostly opinion based, but I’ve never come to understand why Apple hasn’t drastically changed or improved the launcher since the first iPhone got released. I get the having pages filled with apps as their signature move, but it just bugs me that you can’t really customize anything on the home screen besides creating folders adding multiple widgets to the leftmost screen or rearranging apps.

With an Android you have the freedom of downloading a third-party launcher within the Play Store or from the web, and creating a home screen that feels unique and personal. People even show their home screens on social media, so others can replicate their awesome creation. For clarification, within the iOS launcher you can’t change the grid size you can only have four apps in the dock there is no I compact support you can’t move screens around, you can’t play shortcuts or widgets on any screen besides the leftmost screen and the organization is awful.

I can’t categorize the apps automatically in a way that makes sense to me, like alphabetical order. However, I’m not one to judge, because there are people out there who appreciate Apple’s launcher and probably don’t want it to change, but I do feel like a few added options for customization wouldn’t hurt anyone.

#5 Custumization: Android 9.0 is way more customizable than iOS 12. Obviously that’s always been the case, with Android you can customize your launcher to the extreme with tons of bells and whistles. Most Android phones give you the option to use a dark theme and a few others like Samsung allow you to theme the overall UI with thousands of precesses to choose from.

In the Play Store you can install apps to modify the navbar, install more quick setting tiles or use an overlay that is amazing and unique like bottom quick settings, which allows you to have the quick settings panel down at the bottom. if you route the possibilities are endless with different types of romps to flash modifications, install with magic manager or expose framework and tons of amazing themes to use with subscribe team engine and so forth.

When it comes to customization Android is king, and I feel like apple doesn’t want to combat this because they want to keep their interface nice and simple they don’t want too many buttons or options for customization or anything that will give the average user a headache. So those are the five ways android is better than iOS, if you think that are some others, feel free to engage with us in the comment section.