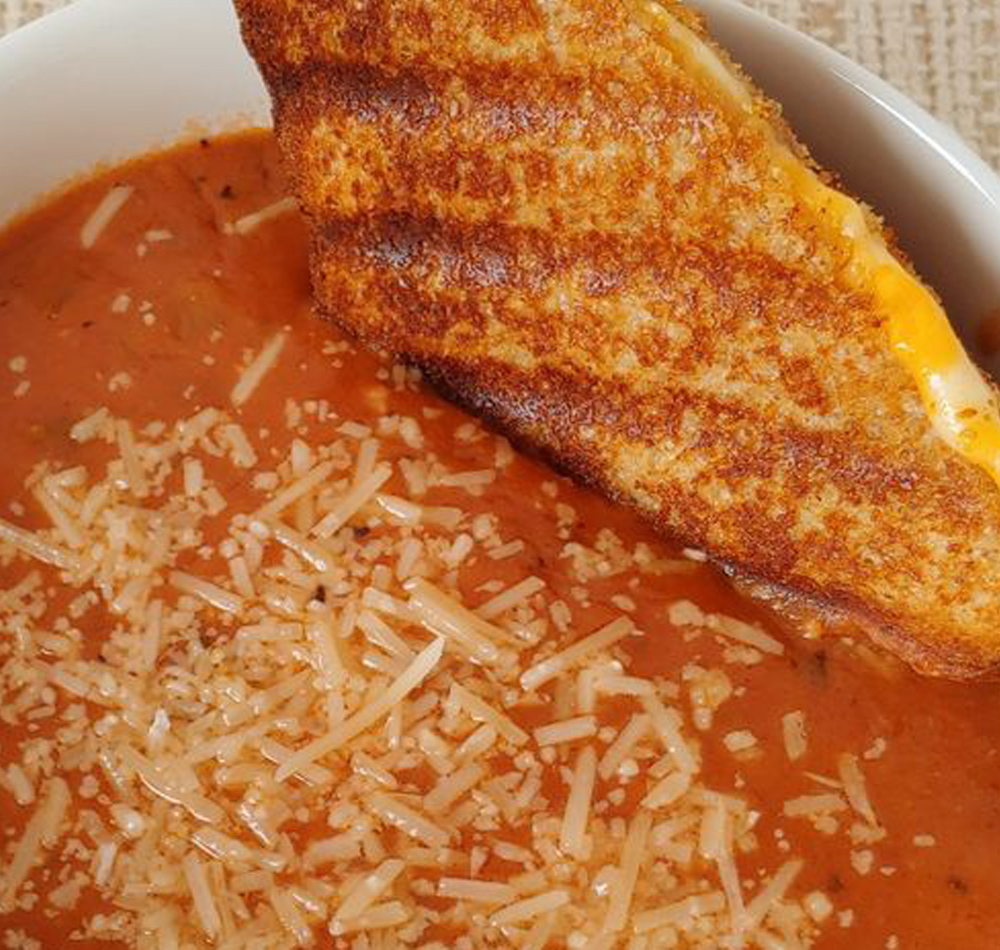 These two recipes actually are a creamless but very creamy tomato soup and grilled cheese. It’s an easy lunch or dinner recipe the whole family will love. I don’t know if I’d say it’s perfect, because everybody’s idea of perfect is different, but I think we’ve come pretty far in perfecting our grilled cheese and tomato soup.

HOW TO MAKE TOMATO SOUP:

Start off by dicing up your onion, it does not have to be too fine because the entire soup will be pureed once it’s finished cooking. So don’t go crazy mincing everything up it’s not important in this instance which is nice.

So, two tablespoons of olive oil into a saucepan, as well as two tablespoons of butter (if you don’t want butter you can skip it it’s certainly okay), add your onion and start that sautéing, you need about two cups of diced onion for this, and then three cloves of garlic they need to be smashed just a little bit to release them of their oils, but they also don’t have to be chopped. in fact, these need to be chopped at all because just smashing them will release enough of the flavor to bring out the flavor in the soup.

You want to get your onions translucent, so sauté them for a few minutes. You can add some salt and pepper. And to make this soup creamy without cream, make some roux by adding two tablespoons of flour to your cooking onions and cooking that off just a little bit. You don’t want any raw flavor here so you want to cook your flour before you add your liquid ingredients, and that will add just a tiny bit of thickness and silkiness to the soup. That replaces the need for cream which I think is really nice.

You can stir or whisk in your broth (two cups of broth). You can use vegetable broth if you’re not a vegetarian, you can use chicken broth. Start slowly and that way you will avoid lumps by whisking and stirring and whisking. It’s a little annoying, but it’s worth it in the end. Because you don’t want lumps of flour in your soup, though, you are going to pair this. So I guess they would puree away, but if they lump up, then it loses all of its ability to help thicken the soup.

one can of whole peeled tomatoes in their juice the whole thing goes right in you don’t really need to do much to that, because again it’s going to be pureed, a couple sprigs of fresh basil, and everything needs to cook together until the onions are very soft, and the tomatoes have cooked down a little bit more. That’ll take about 20 minutes.

So when your soup has had to the trans to cook down you want to puree it I like to use a blender for this. And if you have a stick blender, you can use that. But make sure to remove the basil Springs before you do that (you can garnish with fresh basil when you eat your soup), and then you want to work in batches to blend it so that you don’t make a mess.

The hotter your soup is, it does expand in the blender, so, you have to be careful don’t fill it all the way for safety purposes. And you want to loosen the top so that this team has a chance to escape. and what we like to do is you can either loosen it or completely take it off and then cover it with a towel and that ensures that if something splatters up, it doesn’t get on you hopefully.

Transfer this to a bowl, so you can do the remaining batch and then eventually you’ll put it right back into the pot so that you can reheat it.

HOW TO MAKE THE GRILLED CHEESE:

Now, we were very thoughtful about the process in the kitchen and some of us were firmly in the camp of butter on the outside of the grilled cheese and some liked Mayo for the tang that it gives. So we tested its all variations, the butter, the mayonnaise, and the combination of butter and mayonnaise mixture, and we ended up all really loving the combination that you get when you mix those two together.

So in a cast-iron or a heavy-bottomed skillet on medium heat, You want to get the pan nice and warm, but it shouldn’t be too hot; because you want to cook the grilled cheese low and slow, so, preheat it on medium. And while you’re doing that, you can mix together three tablespoons of butter, three tablespoons of mayonnaise, and spread the mixture on the outside of all the eight slices of sandwiches dividing it as evenly as possible.

Hang a little bit on each then I can always go back and add more, but I don’t want one to loose out that would be not nice. This is the key to deliciousness in the grilled cheese is this mixture. Don’t skimp spread evenly and make sure that each piece gets as evenly coated as possible. I like to do this on a baking sheet only because it’ll be easier to turn the buttered side down.

Get real American cheese you can buy it at Amazon.com, and then three ounces of cheddar cheese you can use any flavorful cheese that you want. You don’t want something that will get like crumbly or oily when it melts, but something with a really nice strong flavor is a great balance in a sandwich like this.

Now, you do have your skillet preheating on medium and then add the sandwiches you can usually fit about two nicely into a skillet, you don’t want to crowd it, and then cover it with a lid just for weighing it slightly down. It doesn’t have to be that big and fit lid, it just needs to start compressing it and reduce the heat to medium-low. you want to make these low and slow and be patient, you’ll probably want to rotate them a little bit in the pan so they cook evenly, and then you flip them halfway through. it takes about 7-9 minutes per batch.

GET THE FULL INGREDIENTS AND INSTRUCTIONS TOGETHER IN THE NEXT PAGE! 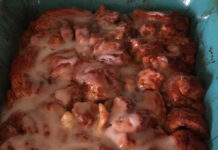 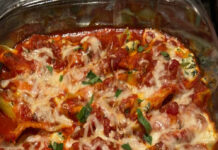