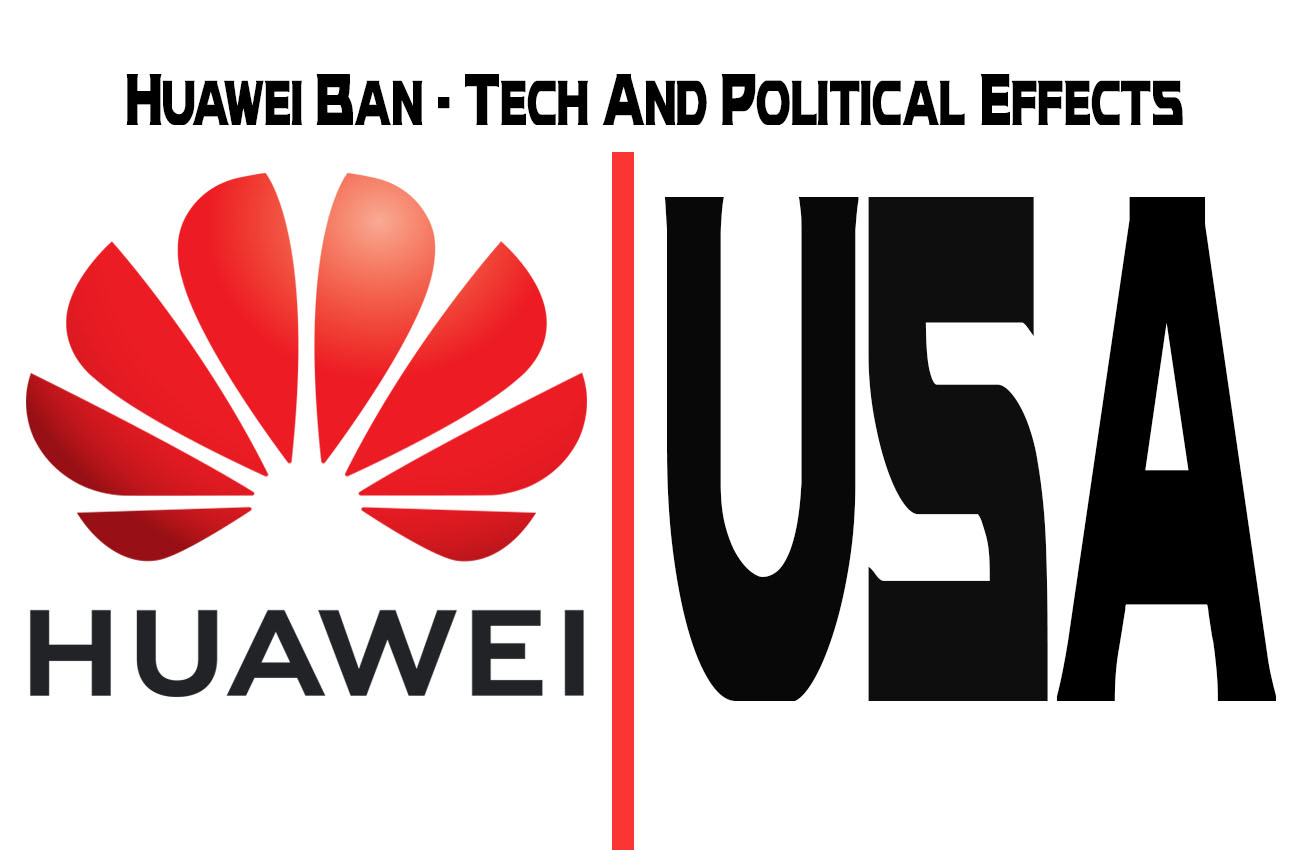 Huawei ban from a Tech perspective and political aspects. The US government has just implemented a devastating ban on Huawei. So, let’s talk about what exactly we know about the ban how this will impact the Android ecosystem and Huawei, and how absolutely up this situation is politically messed.

Two relatively separate things got announced: the first one is an executive order targeting specifically networking equipment, by banning American network operators from installing foreign made equipment that could pose a threat to national security. So, this is only targeting networking equipment like 3G, 4G and 5G towers and radios and stuff like that.

It is only banned to market access, so the US market is unavailable to Huawei. So, this is serious, but not a full-on death blow to the Chinese smartphone giant yet. But second, the US government then put Huawei on the blacklist for being a national security threat, which means that US companies are not allowed to supply Huawei with either products or services going forward without the permission of the government.

The most important partnership Huawei will be losing, is undoubtedly that with Google over Android. It will immediately lose access to updates to Google’s Android operating system, and future versions of Huawei smartphones that run on Android, will also lose access to popular services including, Google Play Store, Gmail and YouTube apps. That means that future Huawei phones, will come without Google services by default unless there is some unveiled contract between both companies.

And for their current phones, Huawei really has two options. And neither of each are good. One, they can leave the phones as they are and not update them. In that case they can keep the Google services running, or they can update those phones to keep them secure and up to date. In which case, they will lose access to the Google services. Again none of those are good options.

The official Huawei response to this is that Huawei will continue to provide security updates and after-sales services to all existing Huawei and Honor smart phones and tablet product, covering those that have been sold and that still in stock globally. But honestly, that leaves me with more questions than answers.

And what about those security updates? Will they break compatibility with Google Play services, or can they somehow still be verified?

And what about new phones? What will they be running?! These kind of questions we just don’t have any answers for yet. What we do know, is that Huawei will continue having access to the Android Open Source project, after all it is an open source project that is available for anyone to use, and there is only the Google services on top that Huawei is banned from accessing.

And one thing to mention here, is that Huawei actually has a very successful Android version that they use on their Chinese devices that does not include any Google services. They have their own App Store, their own security services and all these kind of stuff. So, Huawei isn’t entirely lost on this, but making that work in the West and outside of China, will be incredibly difficult.

Android users outside of China tend to rely on Google services a lot, but even those that knowingly avoid Google apps for example, still rely heavily on background processes from Google like Google Play services, malware protection, location services and so on… and all that stuff will be missing from Huawei’s version as well. And even third-party applications of those, are apps that were not even written by Google might not work on Huawei phones in the future. Because, a lot of these applications they talk directly to a Google service somewhere on your phone.

For example: banking applications check with Google services, if your phone is unrooted and in a secure condition and will only run if that is true. If that Google services is nowhere to be found, they will most probably just never work. Then that means that application developers, would have to rewrite their apps to account for whatever Huawei comes up with to replace the Google services with, and that is quite unlikely to happen.

And then there’s the problem with app stores, there is simply no good alternative to the Google Play Store outside of China. I mean there’s maybe the Amazon App Store, but that is from a U.S. Tech company as well. So, that wouldn’t really be an option, which means that Huawei would probably have to build their own app store which will be a huge task as well.

So, that is about the extent of the Google issue. But, other American companies will also be banned from supplying Huawei with their stuff. For example Intel, Nvidia and Microsoft. So, Huawei’s new laptop business is probably completely dead. And what that means, is that Huawei need to build and make its own processor, Graphics card and the operating system to run their laptops.

Intel also supplies Huawei with processors for their server business, so that might be in trouble too. And thankfully for Huawei, they are one of the very few phone makers that do have their own mobile processor, so they make their own mobile chips and don’t have to rely on Qualcomm for everything they do. But, they still use some Qualcomm tech like, audio codecs for example.

Chinese company has said that they have stockpiled three months’ worth of components in advance, because, they were somehow expecting this. So, they will not go out of business right away, but then all of this sounds absolutely terrifying.


Let’s talk about why these bans were implemented:

They’re really two reasons for that: one of them seems to be relatively legitimate, and the other doesn’t, and it is actually quite dangerous and irresponsible. So, what it seems a legitimate concern, is in network security. Countries around the world including China by the way, are getting very careful with what equipment from political rivals they will allow to go into the core networking infrastructure. Now, China for example doesn’t let political rivals, get anywhere near its own core networking stack and the U.S. is now following suit with this as well.

But, this ban seems to go way beyond the scope of just network security, and it really appears to be a part of the US-china trade war. not only did this ban come out to just days after the latest trade negotiations between the US and China have failed, which implies very happily that Trump is actually simply using this ban, as a sort of trade negotiation to squeeze better out of China, but Trump has also not shied away from using similar tools in the past.

Before, Trump has actually lifted a similar ban on ZTE in the past, just to get a better deal and he has said repeatedly that he would be happy to trade Huawei’s arrested Chief Financial Officer Meng Wanzhou for better trade deals, which is incredibly problematic countries should not arrest people and ban companies because they want better trade terms.

Those are reserved for breaking the law. And anyone who is actually concerned with security issues, should be furious about having those fused together in this amorphous blob with the trade negotiation issues. Because, it completely delegitimizes a very legitimate issue.

Otherwise, it also raises a lot of questions: one, will trump simply lift this ban like he did for ZTE? Honestly, I think that is entirely possible. I mean he doesn’t seem to be very concerned with being consistent in his decision-making and he clearly sees all of this as just a part of a deal making process. So, if he gets what he wants, I think it is entirely possible that he would just lift the ban.

Two, will other Chinese companies like Oppo, Xiaomi, OnePlus maybe Lenovo be affected in the same way? I guess that is impossible to predict, but I would guess no. the core difference is that Huawei and ZTE make networking equipment on top of just making phones, like the others and that is much more political. It is a much bigger security fit, so I think those companies are in a different category.

And again, Trump doesn’t seem to concern himself with the details very much, so it is entirely possible that he will just want to throw more companies under the bus just to get better deals. So, who knows and the more you think about it, the clearer it becomes just how much damage this one ban is doing. Of course there’s the huge amount of damage done to Huawei itself, and there is the damage done to the hundreds of millions of Huawei customers most of who by the way are not in the U.S.

So, thank you very much Trump we will appreciate your help very much, but it is also causing a damaged reputation for the US as a reliable trade partner that the rule of law that doesn’t seem very accurate anymore. And it might even start a technological Cold War, where China is bound to retaliate as well.

The assumption that there is a global supply chain that nearly all companies around the world can simply tap into, no longer seems to hold true. And countries will start building their own little silos, so they don’t have to rely on external suppliers. China for example, has stated multiple times that they want to build their own semiconductor industry, which keep them safe from relying on foreign imports.

But even countries that have typically been very closely allied with the US, will also start having second thoughts. German chip maker Infineon for example, have to stop supplying their chips too far away, as they apparently included a lot of US technology. And you can bet that these sorts of companies, will start looking for replacements to send to us technologies.

Huawei being forced out of the Google ecosystem, will also mean that Android as an ecosystem will become more fragmented of course there will be Huawei itself, but think about other companies as well. Over the last couple of years geeks have been cheering on these companies, as they finally started embracing clean stock Android and using Google apps and services instead of writing their own version of everything.

But if these Google services can just be pulled away from their operating systems, because of some trade tensions you can bet that all the big companies will start going back to writing their own software for everything. Honestly, the only potentially positive outcome from this ban, is that maybe a real alternative to the Google owned Android ecosystem will appear on the market it will be incredibly difficult to pull it off, but smartphone companies are finally properly incentivized to do.

So, Huawei has apparently even built a whole new operating system as a contingency plan for situations like these, and so it’ll be really interesting to watch that.