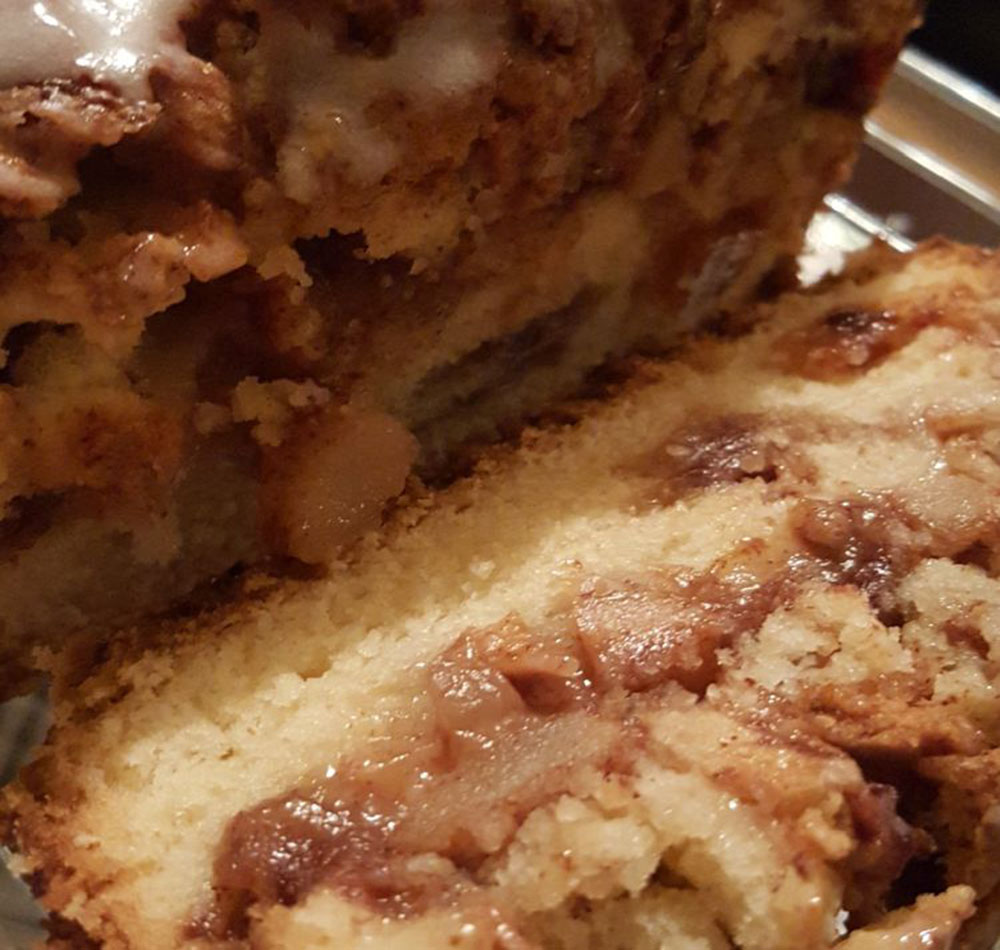 As you know, the normal apple fritter is a fried affair and full of fat, oil and all that stuff that the doctor keeps Advising you to stop eating it, But this Country Apple Fritter Bread is actually a baked affair. It’s a kind of akin to a cinnamon roll with apples in it, but in bread form. The taste is exactly that of an apple fritter that I remember getting in the grocery stores as a kid going grocery shopping with my grandparents.

So this thing really brings back some memories I hope everybody out there enjoys it and you can change the fruit up in this as well. You can add nuts you can go from apples instead of apples add chocolate or you know whatever you’d like. So, it’s completely customizable I’m doing the normal apple fritter flavor today.

The first thing I would like to mention is that we have a simple direction if you want to skip all these tips and details, which I don’t recommend you to do. 🙂 But if you insisted to skip, then you can do that by scrolling down to the bottom of this post and click on that little green button below to see the simple instructions.

Let’s get this show going now the first thing we’re going to need for apple fritter bread is apples this is two apples that have been peeled and cored and chopped pretty rough to that we’re going to add our teaspoon of cinnamon and our two tablespoons of sugar and just give them a nice good toss real quick to get them good and coated.

Next, take 1/3 cup of our brown sugar packed and add to that one teaspoon of cinnamon and just give that real nice and incorporated as well. This is going to comprise the cinnamon sugar layer of our bread and it’s also going to swirl throughout the top of the bread and give it that apple fritter doughnut look. The brown sugar helps the color on the top, so the apples won’t burn. they don’t taste burnt they are not even crispy, and they are nice and moist and the cake itself is extremely moist.

Now, and at this point, add flour and baking powder. Quick TIP: I add baking powder and whisk it into the actual flour before it goes in the bowl, this way you are sure that your baking powder is evenly distributed, and you don’t end up with one section of cake or bread that Rises and the other part doesn’t. 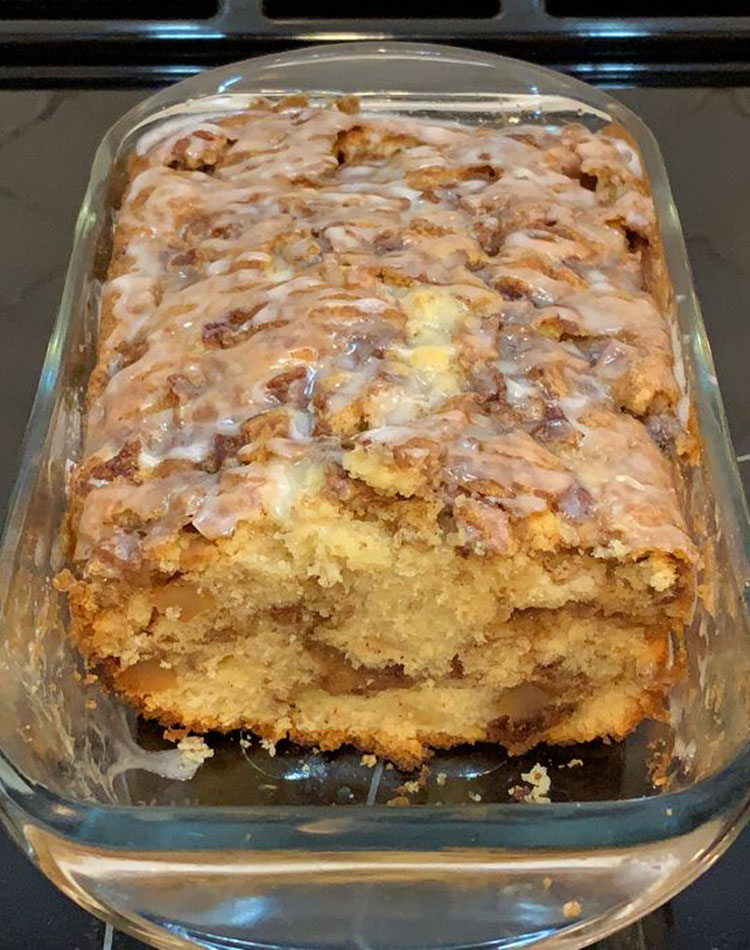 Go ahead add the flour in about a third of a cup or so at a time just until it’s incorporated, and then more it keeps it from flying up in your face and saves you a bit of cleanup time. Once it’s nice and incorporated, stop your mixer real quick scrape down the sides of the bowl, so you can get any pockets of flour that may be hiding on the edges that hasn’t been mixed in yet. and then go ahead let it run for about another 30 seconds and you’ll be done with the mixing.

Take your greased bread mold, and add in one half of the batter making sure to get good coverage on it. You want to get the corners to make sure there are no air pockets all that good stuff. Next thing, you need to do is add half of brown sugar, cinnamon to this layer be generous with it, because it makes quite a bit of sugar and cinnamon. On top of that, place the apples and be sure to press them down; otherwise, the bottom of your bread will have no apples.

Go ahead and add the other half of the batter, and again, just make sure you get pre decent coverage, so you won’t have apples from that bottom layer peeking through. If you can help it, so no neatness doesn’t count here but it kind of helps. So get good coverage keeps apples from burning. And then, add the next half of brown sugar and cinnamon. and because this makes so much, it’s actually better to sprinkle some on top only for the decoration purposes. And once it’s done baking, begin with the next layer of apple.

Now, these are going to be the top apples, means you’re going to see these coming on the top of the bread. So, be sure to smoosh them down though, because, doing that, will bring even distribution of Apple per inch. then there’s the last layer of what you had left of the brown sugar cinnamon, and then take a knife and swirl through it to give it that donut effect.

It’s going look to layered, but not evenly, kind of a swirl like a cinnamon roll. if you will Pat it all back down, smooth it out and into the oven set at 350 degrees for anywhere between 50 and 60 minutes. Be sure to stick it with a toothpick to check for doneness, and remember that ovens vary so mine actually takes about 70 minutes total to cook.

Let your Country Apple Fritter Bread sit for about 15 minutes while mixing up the glaze. Most apple fritters have an anywhere from a translucent to an opaque white glaze on top, so got to do it to the bread got to stay true to the apple fritter.

So, the glaze is just a basic cream glaze with powdered sugar, about half a cup and 2 tablespoons of milk to start with. It actually depends on the humidity in your environment as to how much milk it’s going to take to get your glaze just the way you want it. So, start low on the milk in whisk it, and if it’s still too thick add just a little touch more milk at a time.

If you’re in a humid state like me, start on the low end but you can take it up all the way to even 3 tablespoons of milk if you wanted it really thin, or if you live in a very dry environment. And now, simply take your bread that’s been cold about 15 minutes, though, it’s still pretty warm spread this glaze on. The heat from the bread is going to help loosen up a little bit and start to run that way it will find its own way inside the little nooks and crannies on top. and it’s going to thin it out quite a bit but not to the point where you don’t know that there’s glaze there. just go ahead spread it around and then let it cool completely before cutting and serving.

And there you have it country apple fritter bread, and again you can vary the fruit that you use, and you can even take the fruit out and put in chocolate chips instead, it’s completely up to you. I just think of anything that would go good with french toast would probably go well inside this bread as well. When you cut it, cut it a little on the thick side it’ll hold up better. there are nooks and crannies on the inside, it should be solid; though, you have places where apple are and you want to be sure to get the nice pretty effect of all that. If you don’t need too much details you can check our simple direction on the NEXT PAGE. 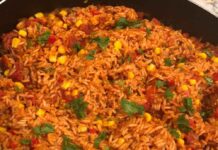 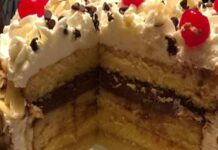 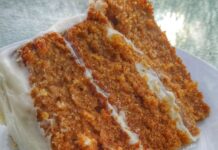